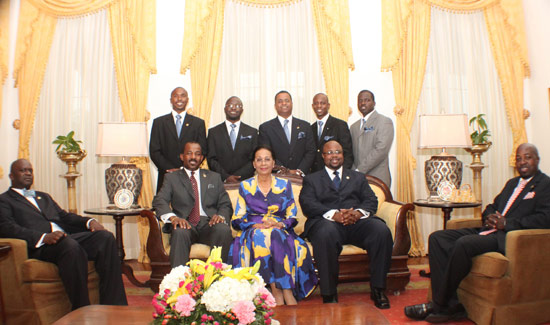 As the nation battles the scourge of crime Police Commissioner Ellison Greenslade praised the “debonair professionals” of the all-male Toastmasters Club 1600, urging them to continue to be a “beacon of hope” for others.

As a Bahamian man, the commissioner bemoaned how “we continue to move the goalposts” for excellence.

“Modeling appropriate behavior is prerequisite for effective leadership. Good behavior flows from a positive mindset and discipline, a correct way of thinking and a correct way of being fueled by respect for God, self, others and the space you occupy,” Mr. Greenslade told scores of attendants packed into Government House for the Thursday evening ceremony.

“Effective leadership will only be accomplished if we go back to basics. We must cultivate a spirit of caring, respect, trust, compassion, integrity, hospitality, generosity and love. To inspire anyone you have to be an inspiration.”

Borrowing a line from Indian leader Mahatma Gandhi, Mr Greenslade encouraged the men to “be the change you want to see.”

The commissioner’s remarks came during the 50th installation ceremony of club officers for the first local branch of an international organization which develops communication, public speaking and leadership skills.

The club has had 50 presidents during its 45-year history. Some presidents were unable to serve a full term.

It was only fitting that the club’s golden anniversary for its installation of officers be held at Mount Fitzwilliam since Government House is now home to Sir Lynden’s widow, Governor General Dame Marguerite Pindling.

Rather than deliver public remarks during the two-hour event, Dame Marguerite opted to warmly greet the new officers privately in the colonial mansion’s drawing room. There, she took note of each their names and hug the men one by one.

For almost five decades, Club 1600 has worked to mold and build the character of thousands of men locally. A leader in the Toastmasters community, Club 1600 has begun work to strengthen younger clubs, particularly those in the Family Islands.

Under the immediate past president, Franklyn Winder, Club 1600 launched its Leadership Tour. This initiative took the Club to visit Family Island clubs that benefitted from Club 1600 training and mentorship. This not only re-energized the Toastmasters program in the islands, but it strengthened Club 1600 relationships outside of Nassau.

The club will return to Freeport in March 2015. Plans are also on the drawing board for the club to visit Andros, said incoming president Valentino Munroe.

During his one-year term, Mr Munroe and his executive team will work to expand opportunities for leadership outside of Club 1600; inspiring members to address the leadership void which prevails in many communities.

The Toastmasters year kicked off July 1. “Inspire Change through Leadership” is this year’s theme for the club.

“Hope is not whimsical or delusional. It does not only flow from a special place or a high office, but hope is derived from the deliberate actions of others. When ordinary people make extraordinary efforts to impact others, hope is born. Hope is necessary for the renewal of life and with new hope change is possible for a better tomorrow.”

Munroe called on his officers and members to deepen their commitment to uplift others whether through
community or professional organizations.

Towards this end Toastmasters Club 1600 will conduct its first Youth Leadership Program (YLP) with the Ranfurly Homes for Children.

Boys at the home will undergo eight weeks of communication and leadership training that will assist them in the further development of their confidence and self-worth.

“Sometimes our circumstances can persuade us to believe we are less than we are, but over the course of eight weeks our members will spend countless hours taking these youngsters through a very transformative program that is sure to change their consciousness,” said Mr Munroe.

In the past, the club has staged similar YLPs for the T.A.R.A. Project and the Elizabeth Estates Children’s Home.

To increase its membership base Club 1600 will launch a new Build Up program designed to afford its middle-rung members opportunities to provide support and leadership to new clubs in the Area and Division. The core unit of Toastmasters is the club, comprised of 20-30 members. A group of four to six clubs form an ‘area’ supported by an area governor and council. Four to six areas form a ‘division’ supported by a division governor and council.

According to Mr Munroe, this Toastmasters year will also see the launch of The Club 1600 Leadership and Communication Foundation.

A committee has already been named and part of their charge is to develop plans to raise funding for the establishment of a facility to serve as a headquarters for the Toastmasters program in The Bahamas.

“This is an initiative that is intended to benefit the entire Toastmasters community and as such, we will be creating opportunities for all of Toastmasters to contribute to this historic development,” said the club president. “As the grandfather, Club 1600 will lead the charge over the next few years to make this dream a reality.”

For Mr Munroe never before has the moment been more demanding and the need more urgent for Toastmasters to serve their communities.

“Together, let the force of our commitment stir a whirlwind of change that will be felt among all who long to see a better day that will bring a new hope for young people,” he told club members.  “A new desire to help a lost son find his way and a new fire that will cause us all to embrace the idea that it is our time, our time to deliver for the next generation.”

During the ceremony the men were sworn-in to office by Division I Governor, Delmaro Duncombe and pinned by District Governor Anthony Longley, both distinguished Toastmasters (DTMs).