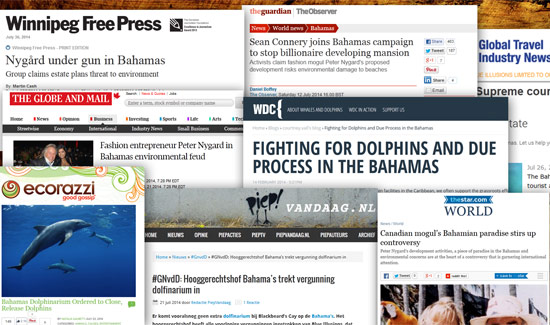 A series of legal actions filed by the environmental organization Save The Bays and making their way to the highest courts in the Bahamian judicial system are attracting international attention with stories in papers and online publications from Canada to Italy, Germany to New Zealand.

“The fact that what we are doing here is generating headlines thousands of miles away is proof that people care about the environment. It’s as simple as that,” said Fred Smith, QC, Callenders & Co. Managing Partner, Grand Bahama, and Legal Director of Save The Bays, an association partnering with several environmental groups but often taking their requests a step further, right into court.

Since its founding one year ago April, the group has filed five separate legal cases, more than an environmental organization in Bahamian history. Even as it has asked the court to review ongoing oil pollution in Clifton Bay and to free eight penned dolphins from a tourist excursion it says provides sub-standard inhumane treatment in violation of the country’s own Marine Mammals Protection Act, Save The Bays’ popularity has soared. The start-up group has more than 16,000 Likes on Facebook, breaking another record for a non-governmental or non-profit in The Bahamas, and nearly 6,000 signatures on a petition it will soon present to the Bahamian prime minister.

But what has encouraged its members and directors most is the hundreds of inches of news coverage its activities have generated in publications as diverse as the Winnipeg Free Press and the UK’s ultra-conservative Guardian.

“It’s been amazing,” said Sam Duncombe, founder of reEarth and a Save The Bays director who fought for dolphin protection for 24 years before a Supreme Court judge in The Bahamas agreed with reEarth and Save The Bays’ petition to close a facility at Blackbeard’s Cay which the two groups argued was opened without the proper permits and which it claimed subjected its captive dolphins to what it called heartbreaking treatment, including lack of shade or protection from storms and being kept in water far too shallow to meet even the lowest standards. It was also claimed the facility threatens a proposed national park because of the waste material produced by the dolphins.
While the tourist attraction has six weeks to appeal, the headlines have carried the news of the ruling to millions.

“From online publications like www.geapress.org in Italy to all sorts of publications in Germany and elsewhere, we are heartened by the interest this story has generated. I am confident it signifies a global trend in awareness for dolphins as the splash and flash attractions that are so cruel for the health and well-being of dolphins gives way to sea-pen sanctuaries.”

If dolphins touch heartstrings, the image of 007 and a famed beach and bay where James Bond and Jaws movies were filmed is giving rise to the most headlines. Located a half hour’s boat ride away from the harbor where the dolphins are penned, the much-photographed Jaws beach on Clifton Bay are the centre of attention in two other law suits filed by Save The Bays. Dealing with unregulated development, one of them is seeking a judicial review in a case involving Canadian-born fashion designer Peter Nygard who has nearly doubled the size of a property he bought in The Bahamas in the 1980s, adding what has been estimated at $30 million or more in value by blocking the flow of sand to the nearby public Jaws beach and accreting land on which he has built a Mayan-themed residential and resort complex. Nygard, who has temporarily been halted by the court, is seeking permission to expand. Despite Save The Bays case citing the prime minister and others for allowing the land acquisition to continue for so long, the names James Bond and Nygard and Jaws beach have been like magnets to foreign media captivated by the case.

“Peter Nygard received a setback in current legal challenges in the Bahamas,” wrote the Winnipeg Free Press on July 24 under the headline “Setback for Nygard in Bahamas.” The July 21 Toronto Globe & Mail carried a headline “Fashion entrepreneur Peter Nygard in Bahamas environmental feud.” That story included the words: “The billionaire who owns a large property in the Bahamas that has been featured on Lifestyles of the Rich and Famous and in Forbes magazines, faces allegations from local residents and environmental groups who say he has been expanding his massive estate without regard for the environment.”

On July 12, the UK Guardian splashed a headline “Sean Connery joins Bahamas campaign to stop billionaire developing mansion.” With a full colour half page photo of Daniel Craig coming out of the water clad in a bathing suit, the Independent July 14 carried a headline ‘Famed Jaws Beach at Risk. “That story noted that the Bahamas government ordered Nygard to return his property to its original size. But the Canadian claims the beach around his home has been created naturally and said that since the government has changed, the order no longer stands.” And the Toronto Star on July 24 chimed in with the headline, “Canadian mogul’s Bahamian paradise stirs up controversy.”