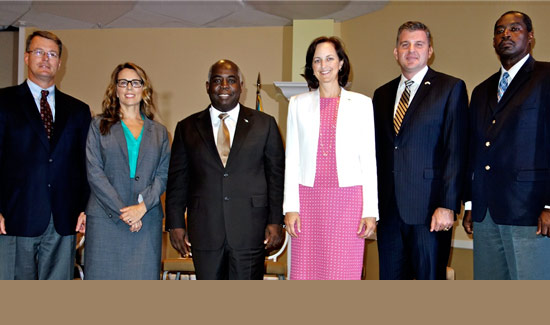 The conference is the fourth in an ongoing series of conferences sponsored by the United States Northern Command (USNORTHCOM) for island administrators and disaster relief personnel in The Bahamas.   During the three-day event, Family Island administrators, councilors, government personnel, and police and defence force officials will participate in a series of dialogues on disaster planning and mitigation.  The sessions are facilitated by subject matter experts representing NEMA, USNORTHCOM and the Pacific Disaster Center.

While addressing the official opening, Chargé Johnson thanked the Government of The Bahamas and NEMA for their continued support and partnership, noting that as leaders,  they all share the joint responsibility as leaders to take the necessary precautions to be prepared before disasters strike.  She also highlighted USNORTHCOM’s ongoing support of joint capacity building efforts with NEMA that include similar disaster preparedness conferences and the recent donation of a $1M disaster relief warehouse in Freeport, Grand Bahama in February of this year.

“This critical three-day conference illustrates the United States Government’s steadfast commitment to partnering with The Bahamas on every level.”  The Chargé added, “This conference also demonstrates my steadfast promise to use U.S. Embassy resources to assist local communities in strengthening preparedness efforts before the inevitable occurs.”

NEMA and USNORTHCOM are now working together to construct a third disaster relief warehouse to provide critical assistance in the southern Bahamas to compliment the donated warehouses in New Providence and Grand Bahama.  The third warehouse will contain pre-staged disaster relief supplies and is tentatively planned to be constructed at the Royal Bahamas Defence Force base in Matthew Town, Great Inagua.