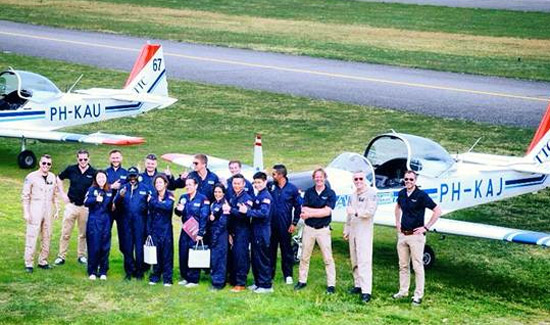 Exuma resident Michael Rolle recently returned from a five day visit to Amsterdam as the national winner of Heineken’s The Voyage: Legendary Travelers Wanted campaign. The champion of the 11-week long competition walked away with the grand prize of 10 cases of Heineken, a $10,000 VISA gift card and an all-expense paid trip to XCOR Space Expedition camp in Amsterdam, The Netherlands.

“It was awesome, amazing. I saw all these things I’ve never seen before and going into a space simulator, that was wow,” said Rolle. “Who really thinks about visiting ‘space’?”
Rolle’s route to mock space travel was paved by luck during a lively drawing of those Heineken enthusiasts who collected Heineken bottle caps during the award-winning beer’s under-the-cap promotion. While Rolle represented The Bahamas, he was in the company of others who had capped the honours in their countries and the entire entourage was treated like superstars, he said.

“The trip to Amsterdam was 13 hours and when we got to the airport, there was a whole team waiting to welcome us,” Rolle said. Driving through the city to the luxury hotel that became home base for the 3-night, 4-day trip, Rolle was wide-eyed at sights a world apart from the sand dunes and sea of Georgetown. “I’ve never seen so many bikes, everyone was bicycling. And the people – oh, the people were so great, so friendly.”

The literal highlight of the trip – a mock voyage into space.

“They told me I have to go up in this plane and I thought I could have ducked out of that but it was wild, great. We had all these classes and then they sent me into outer space simulation,” Rolle said.  The trip included a lengthy tour of the Heineken brewery headquartered in Amsterdam and celebrating its 142nd anniversary this year.

Heineken is gearing to launch its Unseal Legendary Moments which begins on November 3 and ends on December 18. During this period, patrons will have the chance to be instant winners of complimentary Heineken, special edition Heineken 5L draughtkeg, a branded briefcase with a holiday gift valued at $200 of HD tablets, Beats by Dre, laptops, wireless speakers, streaming media players and smart watches, just by looking under the cap. The promotion will culminate with a super grand prize of an 8-day trip for two to any destination in the world complete with an iPhone6 and Heineken travel bag.

“This is the second year we have done this and we’re looking to generated even more excitement,” said Heineken Brand Manager, Janay Pyfrom. “After all these are experiences and tours that only Heineken can bring.”