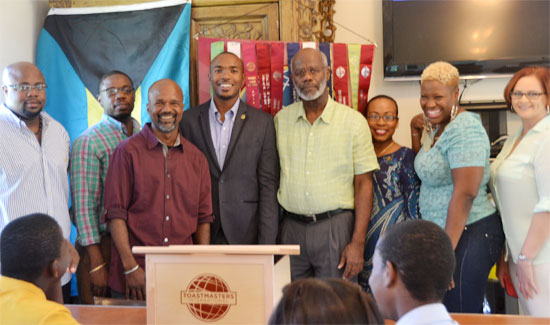 It was a dynamic and heartwarming ending to another successful Youth Leadership Programme (YLP) facilitated by the First Bahamas Branch of Toastmasters, Club 1600 for residents of the Ranfurly Homes for Children.

Through YLP, participants honed their public speaking skills in a supportive club atmosphere. Teens learn how to participate in and lead group discussions/meetings, organize and present their ideas logically and convincingly, and overcome the nervousness everyone feels when asked to speak before an audience.

In their final speeches on Saturday, September 27, one after the other, youths told how they have personally benefited from the programme.

“The programme brought me from one level to the next in a very positive way. I have more confidence when I speak to people. It’s easier for me to give eye contact. Before, I would always look away. It’s not that I’m shy. I just had a problem maintaining eye contact. I’m also able to better control my nerves when I speak,” said an 18-year-old, whose name is being withheld due to her residing within the home.

“I’m sure that there’s something that has changed in all of us through the YLP.”

Her statement seemingly rang true for most participants.

A 16-year-old boy said others noticed the change in him.

“My teacher said she sees the improvement in me. She says to continue to do well,” according to the 11th grader, who credits the programme with expanding his vocabulary and also allowing him to better evaluate speeches. “Toastmasters will be with me for a lifetime,” he said.

Another 16-year-old participant confessed he faced a “daily dilemma” in staying focused. He described how the programmed helped him.

“I’m not shy. I had no problems speaking in the front of people. The problem I had was giving others my full attention. I had a short attention span,” said the 11th grade boy. “Amazingly, this taught me how to be comfortable around people, to be confident and to push myself.”

He thanked the programme’s coordinator, Dion “Da Butcha” Knowles for allowing residents to “express our inner most feelings in words.”

The teen also thanked the home’s administrator, L. Alexander Roberts, for placing him in such a programme which helped him to “better myself.”

The teen told his Toastmasters mentors not only would he follow their leadership and public speaking tips now, but also into the future.

In his first, official presidential address in July, Valentino Munroe outlined the Youth Leadership Programme as one of the club’s priority for the 2014/2015 Toastmasters Year.

Describing YLP as an “effective tool” in helping to strengthen one’s self-confidence, President Munroe acknowledged the impact its made on the youth at the home.

Eleven of them participated in the Youth Leadership Programme which was funded by Generali Worldwide Insurance (Bahamas).

“This was an awesome opportunity,” said VP of Education Carlos Palacious, “To be able to work so closely with young persons who really have the ability to change the country by first improving themselves is an encouraging thing.”

When Club 1600 offered to facilitate the programme at the home, Adminstrator Roberts readily agreed.

“I understand public speaking is one of the biggest fears of most people and I hadn’t had the opportunity to see them speak publicly,” said the administrator who has been with the home for four years. “Every now and then I call on them, without notice, for a vote of thanks. For the most part, they are growing in confidence.”

He thanked the Toastmasters clubs for bringing the “positive innate qualities” they all possess, out of the youths.

During the eight week programme held every Saturday, the Toastmasters mentors witnessed tremendous growth amongst participants.

President of Toastmasters’ Scotia Dynasty Club 829842, Jarissa Miller said she sees leadership capacity in each one of them. Ms Miller’s club partnered with Club 1600 in this initiative.

She recalled how some teens were nervous and timid when they delivered their first speech. Now, they are able to deliver longer, well-prepared presentations, she reported.

Distinguished Toastmasters (DTM), Attorney Charles Newbold III, echoed similar sentiments.
“Certainly, from where I sat in here on the first day I have seen much improvement,” said Mr Newbold, who served as assistant coordinator. “For those of you who realized the immediate benefits of programme hats off to you, you will see it more in the weeks and months to come.”

Speaking on behalf of Generali Worldwide, Toastmasters Division I Governor and manager of sales at Generali, DTM Delmaro Duncombe said he was pleased to witness participants “final steps to becoming the greatest, most effective leaders and communicators in The Bahamas.”

Students received a completion certificate at the end of the course.

One lucky student was guaranteed a job with 100 Jamz after making a positive impression on owner, Robert Carron during a YLP tour of the station’s facilities.

The First Bahamas Branch of Toastmasters, Club 1600 meets every Thursday at 8pm at SuperClubs Breezes.