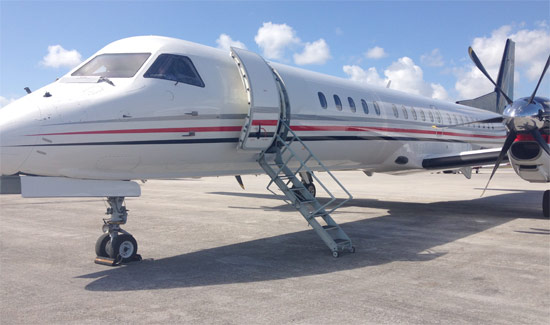 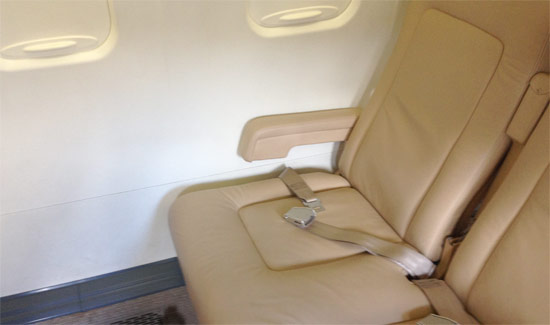 Davis was one of many of the key influencers, media and other government officials in Abaco who toured the airline on Tuesday to view the state of the art aircraft, that was in Marsh Harbour on its introductory trip to the Island – the actual flights to Abaco and the other Bahamas Out Islands, are scheduled to begin in April of 2015.

“This is a wonderful opportunity for Abaco, Davis said.    Affordable and adequate airlift has been a challenge for sometime for us so this new service is a plus for the destination.  This is in fact a huge plus for Abaco especially with our new terminal,” the tourism official said.

Jim Swieter, founder of IJet Charters, which is providing marketing and reservations for the scheduled charter, advised that the company’s plans are to fly direct scheduled flights, April through August, from Fort Lauderdale to Marsh Harbour, Abaco; Freeport, Grand Bahama, Bimini;  Georgetown, Exuma and North Eleuthera.  He said that the scheduled charters will fly out of Sheltair at Fort Lauderdale-Hollywood International (FLL), which will streamline the check-in process. Some return flights will arrive at FLL Terminal 4.

“This definitely will be the top-of –the-line service choice for all airlift currently servicing the Bahamas,” said Swieter, who added that all flights will offer complimentary beverages,
all premium class seating and high-speed travel. He also disclosed that the company is
looking to schedule a non-stop from New York to Marsh Harbour during the high season.

Abaco Island currently has daily service from the U.S. on American out of Miami; Silver Airways out of Fort Lauderdale, Miami and seasonally out of Orlando; Sky airlines also operate four flights per week out of Fort Lauderdale and Bahamasair out of West Palm Beach.  Davis said that discussions are already taking place for additional new carriers to fly to the destination.

Davis shared that the luxury aircraft’s intended flights to Abaco, is perfect timing, as Abaco’s new airport is expected to be fully completed when the services start next spring.
There was a soft opening of Abaco’s new International Airport terminal in May of this year.   The opening has provided opportunities for Abaco businesses in terms of shop spaces.  Also   the expanded space in the new terminal allows for passengers arriving and departing the Island to be comfortably accommodated. A new tower has been constructed and upon final completion will allow for night flights.   Further, plans are well underway for the upgrading of the runway to accommodate large jets.

The aircraft to be used for the new services to Abaco and the other Islands, is a Saab 2000 twin-engine high-speed aircraft with an average cruising speed of 425 mph with a maximum certified ceiling of 31,000 ft and a non-stop range of 1,300 statute miles. Crewed by three, it is equipped with an “all glass” flight deck (Collins Pro-Line IV).  Meregrass’ Saab 2000 is the first and only aircraft of its type to operate on a 135-charter certificate.  It seats 30 passengers in a cabin designed to accommodate 50.  Consequently the seat pitch provides ample legroom.