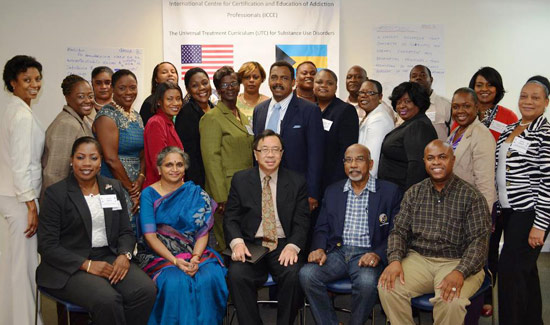 With funding from the Caribbean Basin Security Initiative (CBSI), the U.S. Embassy’s International Narcotics and Law Enforcement Affairs (INL) Section is partnering with the Sandilands Rehabilitation Center to create a cadre of internationally certified drug treatment personnel in The Bahamas. 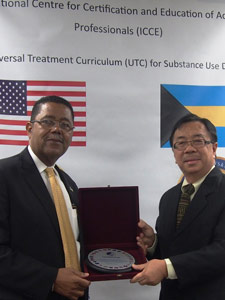 As part of this program, the first two-week train-the-trainer training of the Universal Treatment Curriculum (UTC) for Substance Use Disorders began at the Public Hospital Authority on October 27.  Minister of Health Dr. Perry Gomez formally launched the training program at a small opening ceremony where he emphasized the importance of providing holistic treatment for substance use disorders to prevent and reduce the demand for dangerous drugs and crime.

Over the course of the next year, personnel from the Colombo Plan’s International Centre for Certification and Education of Addiction Professionals (ICCE) will train and certify a group of master trainers in The Bahamas who, in turn, will train others in The Bahamas and throughout the Western Hemisphere.  These practitioners will also promote evidence-based practices for the enhancement of drug treatment service delivery and outcomes.

The two-week course that began on October 27 was the first in the UTC series of four cycles with eight curricula.  Participants are required to participate in the entire series of training before sitting the certification exam.  The exam will qualify practitioners to become International Certified Addictions Counsellors (ICAC I), an internationally-recognized certification for drug treatment personnel.

19 participants are currently taking part in the program from various government and non-governmental organizations including the Ministry of Education, Sandilands Rehabilitation Centre, National LEAD Institute, Bahamas Association of Social Health, Willie Mae Pratt Centre for Girls and the Simpson Penn Centre for Boys.

The UTC content is interactive, and includes role playing and group discussions in addition to classroom-based lectures.  The group of master trainers has so far found their first two weeks of training to be memorable.  One participant commented that the training was “as fun as it [was] hard work.” 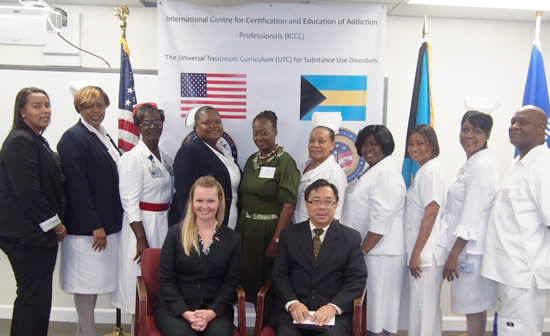 About the Colombo Plan and ICCE
The ICCE was established in February 2009 as the training and credentialing arm of the Drug Advisory Program.  It is a part of the global initiative funded by the Bureau for International Narcotics and Law Enforcement Affairs of the U.S. Department of State in special collaboration with the National Association of Alcohol and Drug Abuse Counsellors that aims to train, certify and professionalize the addiction treatment workforce in the region.

About INL
The Bureau of International Narcotics and Law Enforcement Affairs (INL) advises the President, Secretary of State, other bureaus in the Department of State, and other departments and agencies within the U.S. Government on the development of policies and programs to combat international narcotics and crime.  INL programs seek to reduce the entry of illegal drugs into the United States; and to minimize the impact of international crime on the United States and its citizens.  www.state.gov/j/inl

About CBSI
The Caribbean Basin Security Initiative (CBSI) is a regional security partnership between the United States and the nations of the Caribbean that combats the drug trade and other transnational crimes that threaten regional security.  The United States, CARICOM member nations and the Dominican Republic are improving citizen safety throughout the Caribbean by working together to substantially reduce illicit trafficking, increase public safety and security, and promote social justice.

Captions: U.S. and Bahamian officials with participants in the first train-the-trainer training of the Universal Treatment Curriculum (UTC) for Substance Use Disorders.