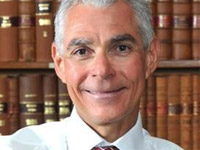 As investigators released findings Friday revealing that a drone came within 20 feet of an incoming Airbus flight over London’s busy Heathrow Airport in July, declaring the incident a “serious risk” to human life, local aviation lawyer Llewellyn Boyer-Cartwright renewed his call urging Bahamian authorities to regulate or, at a minimum, implement guidelines for operators of unmanned aerial vehicles (UAVs).

“The findings that were released on Friday of the investigation into a close call over Heathrow, one of the world’s busiest airports, in July between a 180-seater Airbus A320 and a drone flying at an altitude of 700 feet declared there was a ‘serious risk of collision’, giving the incident the highest risk rating, something regulators and investigators do not take lightly,” said Boyer-Cartwright, a former commercial pilot and the first attorney from the Bahamas to be admitted to the Lawyer Pilots Bar Association.

That incident and the report were stark reminders, said the Callenders law firm partner, that the increasing popularity of drones sharing air space with commercial or private manned aircraft are becoming an unforeseen and unintentional, but very real, threat to the safety of air travel.

“So far, we have been talking about close calls or near-misses, but if one day luck runs out and there is a collision over a busy airport or any heavily populated area, the consequences could be disastrous,” said Boyer-Cartwright.

“Right now The Bahamas has an excellent opportunity to get out in front in the region with UAV regulations and/or guidelines. The U.K., U.S., Canada and Australia have adopted legislation or regulations governing the use of UAVs, particularly in areas close to airports. In fact, a man in the UK just became the first person in that country to be convicted of dangerous and illegal flying of a UAV. He was fined £800 plus £3,500 in costs to the Civil Aviation Authority for flying a home-built drone in restricted air space above a nuclear submarine facility and on the same day too close to a busy bridge.

“The Bahamas should move on this as quickly and efficiently as possible even as the Ministry of Tourism and tourism partners work to increase airlift critical to the new developments coming on stream next year. The Bahamas has a very high rate of air traffic for the size of our population and with efforts now underway we can expect that to grow. At the same time, the use of UAVs is exploding at a rate we never would have predicted a decade ago and will likely increase further with the expected popularity of UAVs as one of the hottest items on Christmas gift wish lists.”

Most regulators, Boyer-Cartwright said, are distinguishing between low-threat and serious threat UAVs, with the smaller versions sold in electronics or hobby shops posing less risk than the larger models used by professionals for commercial photography or surveillance. In either case, he believes, distance from airports should be defined and those who fly near airports or congested areas should be trained, file flight plans and obtain permission before launching. They may also be held responsible for their equipment and any liability resulting from its operation.

In the UK, the British Airline Pilots Association has gone so far as to seek legislation that would require drone operators to get training equal to what a pilot gets.

“In Canada, the new rules liberalize low-threat, lightweight, hobbyist type UAVs, but require those who operate drones of more than 55 pounds to complete ground school training,” said Boyer-Cartwright. Heavier, larger drones are most often used for surveillance or military and wartime operations. In the UK, the Civil Aviation Authority (CAA) requires drones being used for surveillance or collecting data to obtain permission before flying over a congested area.

The issue of control over drones has gained increasing importance as the popularity of camera-equipped remotely-controlled flying machines operated by someone on the ground using a laptop or even a smart phone has grown from a few adventurous souls to widespread practice.

“FedEx is talking about it,” Boyer-Cartwright said. “Real estate companies that once relied on Google Earth are now buying their own drones to get better aerial shots of estates they have listed. All sorts of commercial enterprises from entertainment and concert attractions to rodeos are using drones to photograph their offerings for online marketing and reservations. Developers, farmers, those in the security business are discovering the benefits of the view from above.

“At the same time, the amateur hobbyist who just wants to have a little fun with a remote controlled object could endanger an aircraft with many lives aboard if the two collide. There have to be clear rules and guidelines for the sky just as there are for the road.”

This is not the first time Boyer-Cartwright has called for drone regulations in The Bahamas.

“They have equipment with camera platforms mounted on multi-rotor UAVs which they build at great expense and with great care to use in work for government agencies, security, resorts, real estate developments, even on movie sets here and as far away as Hollywood and L.A. so they want others to recognize how important it is to respect the air space and not take the play of zipping drones across the sky lightly as if you were flying a kite in a remote area. Lives are at stake,” said Boyer-Cartwright.

Sky High Media partners Lance Knowles and George Mosko, who have done shoots in Florida, California and Grand Cayman as well as in their native Nassau, urged passage of regulations or guidelines.

“It may sound strange to ask for regulations where none exist,” said Mosko. “But for us, this is very serious business. We have invested hundreds of thousands of dollars in equipment. Nowadays, you can buy a drone off the shelf at a hobby store for less than $1,000 so you can imagine the chaos that could erupt in the skies if the quickly evolving industry is not regulated.”