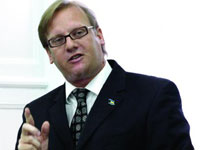 There’s a weight loss show called ‘The Biggest Loser’ and, on VH1’s TV channel, there’s another called ‘Best Week Ever’. At least we all know who is a winner, who’s having the best week ever this week, none other than Financial Services Minister Ryan Pinder.

Perhaps, the Cabinet is the biggest loser this week. The fact that Ryan Pinder will no longer be a member of the Christie cabinet greatly weakens that caucus. He undoubtedly added to the brains trust of that entity and, quite frankly, gave many Bahamians a sense of confidence about taxation and financial services – of which he has institutional knowledge – particularly with the onset of Value Added Tax (VAT) in less than 20 days.

This week, news of Ryan Pinder’s resignation in favour of an “extraordinary, mind-blowing” job offer has given rise to a new term that myself, and a dear friend, have coined – being “Pinderised.” Her definition of “Pinderised” amounts to – she says – “the act of kicking people or an entity in the rear end to accept a better offer.”

Mr Pinder’s resignation, which was confirmed on Tuesday night, will take effect at the end of this month. He is expected to become Deltec bank’s new chief legal officer, head of wealth management and a member of the bank’s executive committee.

That said, there are questions relating to his impending resignation that Bahamians – far and wide – would want answered, those being:

(a) Did he negotiate or interview with Deltec Bank whilst serving as a Cabinet minister and did that influence their hiring of him? Could that be seen as influence peddling in his own self-interest?

(b) Why is such a competent tax lawyer and financial service professional abandoning ship immediately before the onset of VAT when he is most needed?

(c) In future, should there be restrictions in place that would ensure that a person serving in as a minister should not be able to resign and, immediately thereafter, take up a post in a private sector entity for whom his ministerial portfolio may have required direct interaction, input and influence on his part or, in other instances, regulatory oversight? Of course, there will be some exceptions depending on the circumstance but generally should this timeframe amount to perhaps three to six months?

Perhaps, we should examine the stipulations concerning such things in other jurisdictions.

I’ve heard some folks calling for Ryan Pinder’s resignation from the House of Assembly. That’s simply far-fetched and illogical. His service as a minister and him being elected to the House of Assembly should not be coupled in the way that I’ve heard folks discussing it. Quite honestly, I think Ryan Pinder is one of the most accessible, down-to-earth MPs one would find. He’s very active on Facebook and apparently quite known and reachable to his constituents.

Quite honestly, Ryan is an acquaintance of mine and I think that he’s an affable guy.

He asserts that he “made a decision that I deemed to be in my professional wellbeing” and, as a professional, I cannot altogether fault him for that. That would simply be unfair. No doubt, many of us have had occasions in the past, and will have occasions in the future, to “Pinderise.”

In the instance that the Prime Minister wants to keep Michael Halkitis as his junior minister, I think Khaalis Rolle would be a good choice as the new Minister of Financial Services.

I wish Ryan the best of luck in his future endeavours.