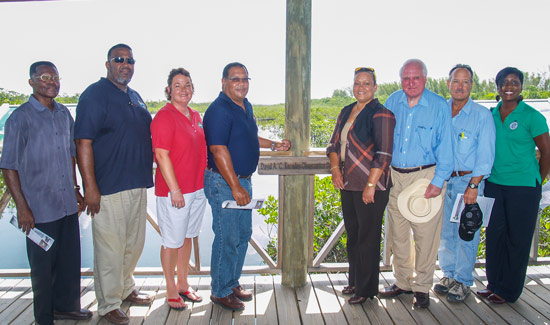 Nassau, Bahamas – The Bahamas National Trust (BNT) was saddened to learn of the passing of Sir Jack Hayward O.B.E. on Tuesday, January 13th at the age of 91.  Sir Jack was a longtime friend, and benefactor of the BNT, supporting the Operations Raleigh Initiative which built the first bridge in the Lucayan Park, as well as purchasing half the property value of the Retreat, which became the headquarters of the BNT from Arthur Langlois in 1975 allowing Mrs. Langlois to remain in her home until her death in 1985.

Sir Jack is probably best known among Trust supporters for his challenge gift of $1 million which created and incentive for donors to give to the Heritage Fund Endowment raising $2 million.  Sir Jack honoured his pledge in March of 1989 presenting the BNT with a cheque for 1 million dollars thus creating the Heritage Fund Endowment to support the work of the Trust.  Such an act of unselfish generosity is indeed rare, as was the man behind it.

“Sir Jack is by far the most significant donor to date – his support for the BNT was very generous and sustained across several decades,” said Eric Carey, BNT Executive Director.  “He supported the BNT in Grand Bahama, but he also supported core BNT programmes and operations at the national level. The BNT will be forever grateful for his kind support of our work over these many years.”

Another such instance of his generosity was his donation to rebuilding after hurricane damage to a BNT national park.  In 2005 due to damage from hurricanes the BNT was forced to close the bridge built by Operation Raleigh in 1985.  Raising $250,000 to replace the bridge was a daunting task made easier by a very generous donation of $130,000 from Sir Jack.  In a special ceremony in 2012 to thank donors, Sir Jack was the guest speaker at the ceremony.

“I remember when we first built this bridge with Operation Raleigh in 1985,” said Sir Jack. “Thanks to the many dedicated volunteers who tirelessly trenched in the swamp, we were able to create a wonderful path for visitors and Bahamians to see our beautiful beaches.”

Honourary chairman and co-owner of the Grand Bahama Port Authority, Sir Jack was a renowned philanthropist giving money to causes close to his heart. He had been unwell for several months and died in Fort Lauderdale, Florida. He will be sorely missed by all who knew him.  The BNT extends heartfelt condolences to his family and friends.

“We will ensure that Sir Jack is forever memorialized by the BNT for his generosity towards our organization,” said Larry Glinton, BNT President.  “Sir Jack was one of our most steadfast supporters and our organization was immeasurably strengthened because of it.” 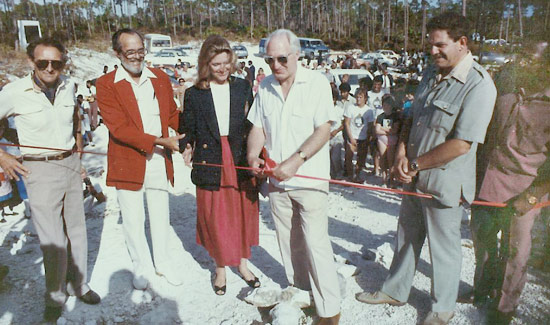 The Bahamas National Trust was created by an Act of Parliament in 1959 to build and manage the national park system of the Bahamas. Possibly the only non-governmental organization in the world charged with such a responsibility the TRUST, as it is commonly known works daily to conserve and protect the natural resources of The Bahamas, through stewardship and education for present and future generations. There are currently 27 National Parks managed by the TRUST with more than 1 million acres of marine and terrestrial areas protected.

Captions: (Top) Sir Jack along with BNT board members and executives at the refurbished Lucayan National Park bridge (Photo courtesy of Keen i Media for Barefoot Marketing)