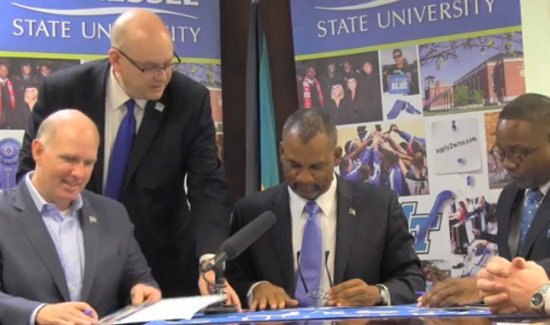 GREAT EXUMA, Bahamas – A Franklin, Tennessee, couple who founded a network of substance-abuse treatment clinics has funded a special, targeted scholarship that will allow students from a high school in the Bahamas to attend MTSU.

Michael and Tina Cartwright, who have a second home in The Bahamas, wanted to help students from L.N. Coakley High School in Great Exuma develop expertise through higher education that, in turn, would help benefit others on the island of Exuma.

The Cartwrights, who both attended MTSU, established a $600,000 scholarship fund that will cover tuition, housing and other expenses for four Coakley students to live and take classes on MTSU’s Murfreesboro campus. The scholarship will renew after the first group of four honorees graduate from MTSU.

Michael Cartwright, chairman and co-founder of American Addiction Centers, announced the gift during events Tuesday and Wednesday (Jan. 21-22) in The Bahamas. MTSU President Sidney A. McPhee, a native of The Bahamas, joined Cartwright in announcing the scholarships.

“Tina and I understand the value of higher education,” said Michael Cartwright. “We approached President McPhee to establish a pathway that could recognize and reward future leaders who could return to Exuma as leaders and will help spur economic development on the island.”

Jerome Fitzgerald, Bahamian minister of education, science and technology, said he was “humbled” by the Cartwrights’ donation. “I applaud your initiative and fully endorse this endeavor that will greatly benefit the students of Exuma, the island of Exuma and, by extension, our country,” he said.

McPhee said the Cartwrights wanted to make a targeted gift with an institution they trusted would help mold students into leaders for Exuma.

“Michael and Tina wanted to invest in MTSU, a known entity to them, to help people that they knew could benefit from mentoring, guidance and direction for this archipelago,” McPhee said. “Our university will help prepare and educate the students selected for this honor to become leaders and influencers on the island.”

“The Cartwrights hope that the recipients of their award will return to their home communities and contribute to the economic, social and cultural growth of Great Exuma,” McPhee said.

McPhee said students must complete two experiential learning or community service projects in Great Exuma as a requirement of the award.

“Tina and I wanted to give something back to the people we’ve come to know, love and respect during our time in The Bahamas,” Michael Cartwright said. “MTSU offers a unique experience to transform the lives of those selected for this program.”

“We are proud of the Cartwrights and appreciate the confidence they have placed in MTSU to effect change in a community that they value,” McPhee said. “Their gift is a significant financial contribution that over time will transform the lives of the recipients and the community of Exuma.”

McPhee has made targeted international enrollment a strategic priority for the university. MTSU’s international student enrollment has doubled – from 396 to 789 – in five years, and it had 335 students studying abroad last summer.