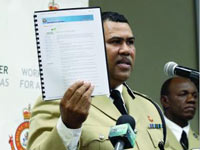 I found the Royal Bahamas Police Force’s statistical presentation relative to criminal activities for 2014 to be quite interesting. And that’s putting it mildly!

According to the latest statistics released by the commissioner, serious crimes in the Bahamas have decreased by 18 per cent. Notably, the decrease in serious crimes was influenced by decreases in manslaughter, those statistics also reflect decreases in manslaughter, rape, attempted rape, unlawful sexual intercourse, armed robbery and robbery, which all decreased by 25 per cent, 29 per cent, 45 per cent, 33 per cent, 10 percent and four per cent respectively.

By all reasonable definitions, violent crime is described as any offence that involves violence or the threat of violence. So, how is it then that incidences of assault are mysteriously missing from the Royal Bahamas Police Force’s 2014 statistical breakdown? Why are assaults not considered as violent crimes? Had assaults been included in the statistical breakdown, would there have been an 18 per cent reduction in the overall rate of serious crimes?

All things considered, as I reflected upon the acts of violent crime that have occurred in our country in recent years, at times I feel that we need to conduct our own war on terror. Crime, for our nation, has become a crippling disease and the mass murders, attempted murders and other instances of violent crime – where fellow Bahamians are being massacred, Mexican style – could lead one to wonder if we should welcome visitors to our shores with a “hola, welcome to Mexico (I mean the Bahamas)” greeting.

Indeed, life in these tranquil islands should not amount to an existence of fear or constant, tedious vigilance of one’s surroundings at all times. It seems clear that Bahamians are becoming accustomed to operating in survival mode in our daily goings and comings. Certainly, my son and so many children – who are the up-and-coming generation of Bahamians – should not inherit any culture of fear and trepidation.

Without a doubt, we are in need of a societal renaissance. Criminals have taken a wrecking ball to Bahamian society and, to quote the words of Jamaican reggae artist Sizzla (aka Miguel Orlando Collins), “some don’t care their heart is like ice, after kill another dem rejoice”. Persons – particularly wayward young men – have taken to ending the lives and devouring the life chances and expectations of so many of our citizenry.

In its June 14 “Overview of the Commonwealth of The Bahamas 2014-15 National Budget”, KPMG noted a number of concerns that required the government’s “close ongoing attention”, noting that:

“The second major concern is the issue of crime. Aside from the terrible impact of crime on society and the affected families, it also has fundamental economic consequences.

“Firstly, increasing crime calls for increased costs of policing, the justice system, prisons, legal services, Defence Force and social services (indeed the budget for these six areas alone amounts to approximately $350m, 20 per cent of the total recurrent expenditure budget of the country). Secondly, if crime cannot be arrested, it will be highly detrimental for a country that is trying to attract more investment and increased tourism.”

So, was the police force’s statistical breakdown of the crime numbers merely meant to downplay the occurrences of violent crime? Was it an all-encompassing look at violent crime in the Bahamas?

In September 2012, Commissioner of Police Ellison Greenslade announced that attempted murder, attempted robbery and stealing from vehicles would no longer be included when major crime statistics were released and would instead — in future — be listed separately. That said, they were among the categories of crime statistics listed at Tuesday’s press conference though assaults—whether they be aggravated, sexual or otherwise — was not.

There are those who are already charging that the police have been directed to paint a glowing picture by variation of the definitions of the various heads of crime. There are folks who are suggesting that what some see as a fudging of the crime statistics is demonstrative of the importance of the Freedom of Information Act towards strengthening our democracy.

Frankly, both the Federal Bureau of Investigation and the United Nations list assaults among their listings of violent crimes. A Google search would affirm the same. So, since the police suggested in the past that it was changing its presentation format to be consistent with international norms, considering that the FBI, the UN, the British and countless others all include assaults, is this the force’s version of presenting data consistent with international norms?

The Bahamas recorded 123 murders which amounted to an increase of three per cent when compared to 2013 figures (119).

That said, what about those unclassified deaths, such as the apparent homicides at Anguilla Cay, apparent suicides and other homicides? What has been counted in the calculation of the murder count and what hasn’t?

I accept the commissioner’s assertion that the final word concerning the bodies in Anguilla Cay is in the hands of the coroner and therefore out of his purview but, will the police adjust its statistical outlay if indeed those persons are deemed to have been murdered? And would that apply to several other instances, referred to as suspicious deaths? Certainly, much more must be done to expedite matters before the Coroner’s Court and to engender the confidence of persons seeking some sort of resolution at that court.

Yes, the murder rate is already high but is it that one has to wholly accept whatever the police force classifies as a murder, whenever they decide to do so? Truthfully, when will we know whether certain apparent homicides will be added to the statistical toll for murders occurring in 2014? When would answers be proffered concerning suspicious deaths/homicides occurring in 2014 that are yet unclassified?

Considering the recent crime statistics proffered by the RBPF, if a person shoots another with an unlicensed firearm or without justifiable cause, is that now listed among attempted murders? Frankly, if that is so, one would posit that these numbers—reflected as 22 instances in 2014 as compared to 15 in 2013—should be a bit higher, right? Reliable medical sources have informed me that, on average, more than 300 shootings occur in the Bahamas per annum. Is it possible that these shootings would not be listed as attempted murders? And if not attempted murders, they certainly cannot be listed as assaults since no such category exists in this year’s statistical breakdowns.

Edwin H Sutherland, who first introduced the concept of white-collar crimes in 1939 explained – in his book White Collar Crime – that it “may be defined approximately as a crime committed by a person of respectability and high social status in the course of his occupation.” The FBI has defined white-collar crime as “. . . those illegal acts which are characterised by deceit, concealment, or violation of trust and which are not dependent upon the application or threat of physical force or violence. Individuals and organisations commit these acts to obtain money, property, or services; to avoid the payment or loss of money or services; or to secure personal or business advantage.” Perhaps, in future, the RBPF should also establish a sub-category that speaks to the purported increasing incidences of white-collar crimes in the Bahamas.

Admittedly, it was somewhat surprising to hear that 85 per cent of all murders/violent criminal acts were carried out using a gun. The wave of gun violence that appears to be sweeping across the streets of New Providence week after week has left many residents terrified by the thought that this small island is becoming like the Wild West as we are inundated constantly with reports of the grisly carnage caused by gun violence or told about high-speed chases and dramatic gun battles between rival gangs or of emboldened outlaws engaging the police in gun fights. I thank the police for further enlightening the public of the various other types of weapons—whether that is guns, knives, cutlasses, broken bottles or other sharp instruments—used to commit heinous offences and the rate in usage of these weapons. Once ago, stones — or as we call them “rocks” — or sticks were the only weapons persons would likely pick up in a fight; today, ones chances of surviving a fight is 50/50.

I was most pleased to review the police’s very detailed murder summary, where they set out the location (eg residence, street, yard, open sea, etc), the division, motives (retaliation being highest at 36 per cent, drug related acts, conflicted, robbery, etc), weapons used, the day of the week when murders were most likely to occur, the shift, gender of persons murdered (91 per cent being male), victims’ age range and so on. I also found the police’s traffic fatality and drug seizures/offences statistics were meticulously done. Kudos in that regard!

More has to be done to establish a respectable witness protection programme to protect state witnesses who are being bumped off which, as a result, has left many Bahamians afraid to testify about crimes seen. Considering that the fact that the COP stated that they have solved less than half of the murders in 2014, could it be due to witnesses not coming forward for fear that doing the right thing could result in them losing their lives at the hands of criminals who would be eventually released on bail or their minions?

In recent years, there continues to be a noticeable disparity between PMH’s data and the police. These two governmental entities must, in the interest of public affairs, liaise with each other on such issues. Moreover, it is imperative that the RBPF truly harmonise its presentation of crime statistics to the format such as that which is used by the FBI, the United Nations, Canada, British and so on. All reflect a category that speaks to assaults.

As stated in previous articles, I love the police. I stand with the commissioner. My father was a policeman. However, no entity and no person is above being questioned!

Generally, we must take a multidimensional approach to crime, beginning in the home. The government has to also understand the national sensitivity that violent crime provokes. Whilst mobilising the police force and, to some extent, the Royal Bahamas Defence Force, in high crime areas would perhaps have an impact on the unacceptably high levels of criminality, we must take back our communities—one borough at a time, corner by corner, yard by yard, house by house.