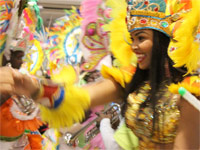 Bahamas Junkanoo Carnival is over, and it was a rip-roaring success. As happened in Grand Bahama, in Nassau thousands and thousands of people thronged the festival site, hungry for the new  experience, and for the first time ever The Bahamas entered the twenty-first century world of festivals, productions and events.  For the first time ever, too, the government of The Bahamas understood and supported the need for real economic  investment in bringing something like this off; the committee that was appointed brought local financial and production expertise to the table and ensured that the execution  of the event would be top-class; Bahamians and international performers were hosted on the same stage and that stage was beamed to the world; and at long, long last the Fort Charlotte/Arawak Cay arena has been turned into the kind of festival village that has long been dreamed about.

Throughout the world, the twenty-first century has brought with it a hunger for the festival experience, and, together with tourism, the cultural economy is one of the fastest growing economic sectors in the world. To say we have been slow to capitalize on that is to understate the reality.  There are many festivals throughout The Bahamas. They have been happening for years, but none of them have been able to  tap into the global economy the way Junkanoo Carnival was able to for many reasons. They are run like petty shops; they are overly politicized; they rely too much on government handouts rather than focussing on economic generation; they are poorly advertised; they are treated like backyard get-togethers rather than businesses. This homecoming culture, as one might call it, has not taken advantage of any of the things that the twenty-first century has to offer with regard to linking culture and tourism and participating wholly in the global cultural economy. Bahamas Junkanoo Carnival has changed that game entirely.

In the months leading up to this event, many people asked me for my opinion of Junkanoo Carnival, and wondered if I would speak publicly and critically about it. I did not. I didn’t join the chorus of people criticizing the concept for the simple reason that I fundamentally agree with the need—economically and socially—to shift the government’s focus and investment from old, mid-twentieth century economic activity to the cultural industries. I fought for an event like this when I served as Director of Culture.  The festival model that was put in place  here is in many ways a mirror image the festival model that was put forward by Keith Nurse in 2004 when he was engaged to lead a task force on the transformation of CARIFESTA. It’s something you will hear me talk about if you download and listen to the podcasts on CARIFESTA, which were produced back in 2008 when we were hosting and not-hosting the festival. Those of us who fought for the inauguration of a festival culture  in The Bahamas have all been vindicated. I could not oppose what I fundamentally support.
But I have always resisted the linking of this transition from homecoming culture to festival culture with the name and form of Carnival.  I have always believed, and continue to believe, that we missed a major, major opportunity to put the whole of Bahamian culture squarely on the world stage by choosing to make our mega-festival in the image of the Trinidad carnival rather than studying the ways in which Carnival were monetized and working out how we could do that with Junkanoo.

I am not convinced by many of the reasons spouted to justify spending money to bring in Trinidadian consultants to produce a cookie-cutter event. No one has yet explained to me to my satisfaction  why it was necessary to import a Trini-style Carnival (when we could have turned to Brazil,  whose Carnaval is even bigger and more lucrative than Trinidad’s, and whose production is far closer than to what exists in Junkanoo today) rather than investing in the time and energy required to make Junkanoo the centre of the experience. Now I have worked with Junkanoo for almost all of my adult life, and I know as well as anyone who has done so how unbelieveably difficult it is to work with the Junkanoo community; how obstructive that community can be; how unreasonably protective they are of their vision of Junkanoo; how ignorant many of them are  of the history and significance of what they do; how petty their differences; how slow they are to change.   Any one of these arguments would have brought agreement from me; but I still would have demanded that the new festival at least  consider  ways in which our own aesthetic and traditions could be honoured, rather than supplanted by those of another territory.  But the ease with which our leaders were able simply to import a ready-made festival was troubling, to say the least.

The whole process  behind  this festival revealed, once again, how deeply people who sit in positions of authority in our country distrust what is ours, how ready we are to push aside what is vibrant and indigenous when it is unformed and messy in honour of what is foreign and nicely packaged. What we did with the festival itself is akin to what we do with our houses, our fruit, and, in general, our national development. We build Florida boxes that hug the ground, have no cross-ventilation, and which bake in the heat and flood in the rains, when we have a perfectly good vernacular architecture that developed to handle our environment. We buy mangoes and avocadoes and bananas and oranges with “Dole” and “Sunkist” and other US stickers on them when the same fruit are growing in our back yards and on our islands; and we have come to regard the solution to all of our local issues as being the outsourcing the problem area to the most convenient foreign direct investor.

Countries don’t grow by outsourcing. Corporations may do so, but citizens are not commodities. And cultural expressions are not interchangeable. What is most troubling about the whole exercise is the narrative that has emerged, that local expressions of culture  cannot  be monetized, that Junkanoo  cannot  be improved, that Junkanoo has “served its purpose” and needs to move over to make room for Carnival. This discussion, this argument, which I have seen flourish on Facebook in too many places to be believed, is part of the reason I am weighing in on this now, after the fact.

Let me be quite clear here. I do not believe for one moment that the reason this weekend was successful was because we were celebrating Carnival and not Junkanoo. The greatest success took place at Da Cultural Village. Even though many people took part in, and enjoyed, the Road Fever, the real achievement lay in the hosting, the production, and the presentation of the concerts on Fort Charlotte and Arawak Cay. The real value of the mega-festival lay in the promotion of Bahamian music, and in the development of our event management skills. It was connected also to the recognition/admission/understanding, at long last, that we exist as part of a wider pan-Caribbean world and that our music has a place alongside it on the global stage. The success that was achieved lay in the marriage of industrial standard production values—and international-style  expenditure  to achieve those values—rather than in any shift to the celebration of Carnival. Let us keep that in mind as we carry this discussion forward.

But let me be equally clear. The most disturbing thing that has come out of the weekend has been the fact that we have now set the carnival in opposition to what is ours—and that to do so, we have spouted the most arrant nonsense about carnival, Junkanoo, and what they mean to us. I have seen people try to argue that Carnival and Junkanoo are basically the same thing. I have seen people suggest that for us to move on  from  Junkanoo  to  Carnival is some sort of inevitable cultural evolution, in complete ignorance of the cultural evolution that has got Junkanoo to where it is today. Rather than incorporating the Carnival as a celebration of our Caribbean connections, which we could have done to the same effect, we have set up an opposition that pits Junkanoo against Carnival.

Finally, one last concern. Much has been made of the fact that a study that I oversaw has found that Junkanoo does not turn a profit. People who have never looked at that study, who have clearly never even heard me explain what that study did and showed have been all over the airwaves using that study to justify why we should invest in Carnival and not in Junkanoo. We have bought into the idea that Carnival is an economic engine for development and Junkanoo is a drain on the public purse. I will go into far more detail about that study in a later post, but let me just say this: Carnival could not have happened the way it did this year  without the participation of the Junkanoo community; their artistic and costuming expertise was hard at work in many of the Carnival companies. Many designers and builders participated in Carnival as a means of making money out of the event, as a means of turning what they do every year for love and the nourishing of their spirits into a means of making a living because they have not been afforded the opportunity to make that living out of Junkanoo. Whether Carnival offered  them  the economic returns that it promised has yet to be determined. For me, the real value of this event will lie in its ability not only to allow at long last the chance for musicians, dancers and producers to make a living doing what they love, but also to bolster the growth of Junkanoo, a festival that we Bahamians have already developed. And that success still remains to be seen.