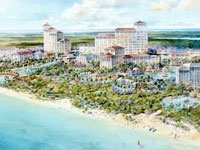 I think Bahamians are about to experience Baha Mar fatigue. I certainly am.

On Tuesday, Baha Mar’s legal counsel attained an adjournment from the Supreme Court, which was taken to allow the parties to engage in negotiations to resolve the issues. Notably, the hearing has been set down to July 20, the same date that proceedings are to resume in the Delaware court relative to Baha Mar’s bankruptcy proceedings.

Prior to this, there was the spat between the Prime Minister and the resort’s developers where unkind, immature and simply puerile utterances were made … by both sides. However, I think the Prime Minister may have taken it beyond the pale by stating that he had “grave concern for the state of Mr Izmirlian’s (Sarkis, developer) mind”. Perhaps the Prime Minister himself should apologise for such un-statesman-like and unbecoming language. That doesn’t excuse Mr Izmirlian, as his company released a statement that I felt was also totally inappropriate.

And then there was the you-say-I-say between the Prime Minister and Dr Hubert Minnis. The Prime Minister’s response to Dr Minnis is well documented elsewhere in The Tribune this morning.

I do have some questions about that proposed, botched meeting.

Is it true that the Prime Minister and Dr Minnis had agreed that Dr Minnis would only bring one other person with him to the meeting? Was the meeting ever confirmed for 10am or 11am between Minnis and Christie?

Is there grand standing happening here at the people’s expense?

On the face of it, it seemed as if Christie was setting up the Baha Mar issue as a national issue. That he was being apolitical. Frankly, it was a bold and strategic political move. The optics are primarly political as it neutralises any comment Minnis could make going forward and also would give the impression – at that time – as if the country and its political parties were all united against the developer. The truth is, Christie at no time sought to include Minnis in the negotiations before this meltdown and now that he had found himself in deep doo-doo he sought to create the facade of unity of purpose.

For Minnis though, he perhaps would have benefited from such a meeting. He should have waited and/or ensured that confirmation of the meeting time was attained from the PM’s office. If Minnis had met with Christie, he would have a more informed view of the inner workings of the so-called negotiations.

For Christie, the Baha Mar debacle is not playing well in the court of public opinion. He is taking a beating, notwithstanding his recent bellicose language in the visceral exchanges between himself and the developers. The fact is, people realise that the government dropped the ball on this and that they are now trying to spin this around to give Bahamians the impression that the developer is just another obnoxious foreigner and, even more, that the only people who could cuss Christie out are Bahamians. Somehow, someway, that manipulative notion has been gaining traction.

Yes, the developer bears fault. There’s fault all the way around. Now, when one tries to apportion quantum and examines the fine details, only then will one conclude who bears what percentage of the blame for this mess. Both sides deserve to be reprimanded for acting like spoilt, little brats!

Why did it appear that the government had taken the side of the Chinese?

If the government of The Bahamas believes that siding with the Chinese will provide better long term benefits, that is perhaps one of the most flawed positions it could take.

According to Dr Duane Sands: “Such a move could be seen to be counter to US positions and could play into the Chinese strategy and positioning in the Caribbean! In this geo-political chess game, there’s a level of naivety, even if government pretends to be self-assured and bombastic. They are penny wise and pound foolish! This speaks to them having very little success in revving up our economic engines. They only see more Sino dollars and couldn’t care what it costs The Bahamas.

“They appear unconcerned. They seem excessively nonchalant about the implications of their decisions and are clearly not forward thinking as they ponder their next move. They can only be considered to be as competent as a novice playing chess.”

Dr Sands went on: “Did you see Christie’s retraction? Let’s remember that this is the same bellicose guy who essentially said that Sarkis had lost his mind the day before. The language coming from Christie and several of his Cabinet ministers is simply intemperate. They are totally disingenuous and their utterances gives one some insight into their own capacities. I see a cooling of the relationship between The Bahamas and our closest allies. It’s obvious that the PM and his Cabinet never heard or understood the concept that a bird in the hand is better than two in the bush. They are gambling with our relationships. Yes, we need to develop our economy, but not at the expense of our most trusted ally. This discussion has to be weighed relative to the balance of power in the region and examined under the prism of the quality of one’s relationship with China and one’s relationship with America. To do otherwise is to not understand the new world order!”

If the Baha Mar project is so important to this government, a particular minister should be specifically dedicated to seeing this project through. We have four ministers of finance/financial services/investments. What are they all doing? Why is one of them not responsible for direct oversight of this project when so much is vested in Baha Mar?

This matter needs to be resolved. May calmer heads prevail!