The Implications Of The Baha Mar Saga 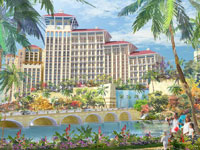 It appears that the Baha Mar saga will be occupying the front pages and serving as lead stories in newscasts for many months (and likely years) to come.

What’s more, we see government on one hand filing legal actions and berating the developer, on another singing the praises of the Chinese construction company and, even more, “yoyo-ing” with the emotions of the public and the employees of Baha Mar by releasing emotionally charged, name-calling undiplomatic statements and following that with a softer outpouring of drivel about how they wish to work with the developer and be seen as moderator. At this point, no one but the Chinese trusts the government and its motives.

It must be clear to all and sundry that Prime Minister Perry Christie appears to have a horse in the race. Frankly, above and beyond anything, it seems that he has become overly concerned about his legacy; after all, he has hitched it to the Baha Mar project. As it stands, Mr Christie must be of the view that the key cog (and perhaps only cog) to his legacy has gone up in smoke and, quite honestly, that would result in the most stable minded of us having outbursts, hot flushes, moments of uncontrolled anger and fits of hysteria.

Yesterday, Supreme Justice Ian Winder dismissed the motion by Baha Mar’s CEO, Sarkis Izmirlian, to get an approved extension for its debtor-in-possession (DIP) financing approval by the Delaware court to take effect. Put simply, Justice Winder decided that Baha Mar’s ongoing Chapter 11 bankruptcy proceedings in the United States will not be recognised in The Bahamas.

As nearly every Bahamian knows by now, Baha Mar and its affiliated companies filed for bankruptcy in a Delaware court on June 29, blaming the resort’s contractor, China State Construction America (CCA), for the delays that caused it to miss previous opening deadlines. The resort also took legal action the following day against CCA’s parent company, China State Construction Engineering Company, in England’s High Court of Justice.

I cannot wait to read the full ruling. However, as the developers and the government have demonstrated their knack for litigation, I – like many others – expect that the decision of Justice Winder will be promptly appealed.

What I found concerning was that, immediately after the ruling yesterday, the government took it upon themselves to release a statement asserting that it welcomed the decision and claiming that it has been “vindicated”.

It was a totally ignorant and inappropriate statement for the government to release, particularly while they pretend to be impartial mediators.

As it relates to resolving the Baha Mar brouhaha, we are not much further on than we were a few weeks ago. The uncertainty remains. Considering the souring of relations between the parties, it is going to take someone with a crystal ball to work things out.

The ultimate question arising is: how do we deal with this problem which has far-reaching implications for a lot of people? Not only must the nearly 2,600 employees at Baha Mar be accounted for, but the fiasco at the Cable Beach resort also negatively impacts the subcontractors who have employees, who have invested monies in equipment and who may not have renewed rental leases elsewhere because they expected to move into their designated spaces at Baha Mar.

Last week, Attorney General Allyson Maynard-Gibson filed an involuntary winding up petition against the 14 Bahamian incorporated companies that make up Baha Mar in the Supreme Court. The government asserts that if the petition is approved, this would effectively pave the way for a court-appointed provisional liquidator to supervise the completion and opening of Baha Mar in the shortest possible time.

The winding up process will leave a lot of people’s lives in limbo. If all of these actions – and those to come – are to be determined in a court, we’re looking at legal wrangling for another five or more years. Meanwhile, the investment will be mothballed.

Unlike the US, where Chapter 11 is protective and allows a debtor to reorganise and perhaps emerge from bankruptcy, there is no proper equivalent to that in Bahamian law. The only applicable, even remotely comparable, legal action we could take is to wind up a company pursuant to The Companies (Winding Up Amendment) Act 2011. Whilst the bankruptcy laws in the US would shield a debtor for a period, in The Bahamas winding up is usually representative of the death of a company.

What’s more, our bankruptcy legislation is archaic, unsparing and inflexible, which is quite different from US legislation.

According to the Bankruptcy Act 1870, bankruptcy in the Bahamas occurs when a debtor – whether a corporate entity or person – neglects to, is unable or refuses to pay debts and its/his assets are administered and distributed to pay its/his various creditors upon an order being made by the Supreme Court. A person declared a bankrupt in the Bahamas cannot hold public office, could become barred from practice in the case of accountants and lawyers, cannot serve as directors on boards of companies nor as trustees and so on.

Frankly, we need to consider adopting similar legislation to the US bankruptcy laws and repeal the outdated Bankruptcy Act of 1870.

As it stands, the government has made it clear that they are not impartial.

The very fact that the Attorney-General took it upon herself to write a letter dated July 17 to China State Construction Engineering Corporation’s top executives adds to the suspicions harboured by Baha Mar and the public, where the view is that the government and the Chinese construction company/China Export-Import Bank are in bed. The letter – which amounts to a suck-up fest – praised the company’s “essential contributions” at the “marathon meetings” between all parties to the dispute. In it, she also expressed the Government’s “profound gratitude” to Baha Mar’s contractor for its role in attempting to resolve the dispute over the $3.5 billion project, implying that some progress had been made at last week’s Beijing talks.

Mrs Maynard-Gibson’s letter was among documents filed with the Delaware Bankruptcy Court by China State Construction Engineering Corporation’s US affiliate to support its arguments to dismiss Baha Mar’s Chapter 11 case.

The Attorney General comments were simply inappropriate. Why didn’t she similarly send the same regards to Baha Mar’s developers/team who, notably, were also at the meeting?

On the face of it, it appears that the government has already decided who they believe is at fault or who they see as being of the greatest benefit to the Bahamas. While they may believe themselves to be entitled to do so, bias cannot be implicit in their comments when dealing with the livelihood of so many Bahamians, when addressing an issue that could have an adverse and long term impact upon the economy. The government cannot continue to masquerade as a fair arbitrator. All things considered, the developer would be right not to trust these persons. It is clear that in order for this matter to be resolved out of court, a team of independent arbitrators is needed.

Does any member of the Christie Cabinet have existing conflicts of interest in the Baha Mar saga? We know that one cannot fairly serve two masters. Does any member of the Cabinet have a family interest in any company that may be the titular owners of businesses at Baha Mar? If one or more members of the Cabinet do have such a conflict of interest, she or he must recuse themselves or be recused. Such a person is disqualified from acting in such circumstances.

There are those who tell me that if they were Sarkis Izmirlian, they would “let the cat out the bag and reveal the goods on all and sundry; on all those in Cabinet who muscled him to have stores in Baha Mar; on all those who wanted kickbacks under the table; on all those who approached him and got a stake in Baha Mar for their friends, family and lovers.”

Did any member of the Christie Cabinet represent Sarkis Izmirlian or Baha Mar at any time and when will they declare this to the public?

The saga at Baha Mar doesn’t leave one with a good feeling. The incestuous practices that can be viewed as the undercurrent to the larger issue means that much has yet to be told.

As with many different crises around the world – for example, the Greek debt predicament, the 2008 mortgage meltdown in the US, the Cuban missile crisis, hostage negotiations – there are often tense, highly charged and drawn out affairs. This is Prime Minister Christie’s moment; this is time for him to demonstrate what his 40 years in public service amount to. This is the Prime Minister’s time to let us see that he is the intercessor, that he can build a coalition that is truly good for The Bahamas.

One of the reasons why people are so afraid and nervous about the Baha Mar saga is because they don’t believe that he has the capacity to do it. Many Bahamians are uncertain and afraid, they don’t know what’s going on and don’t have confidence that the players involved will do the right thing for the right reasons.

I think that Mr Christie should extend an invite to the Leader of the Opposition, Dr Hubert Minnis, who should make himself available. This is a matter of national interest with huge implications. At present, we are watching the evolution of an economic disaster.

Whilst I won’t – and certainly don’t – carry any water for Sarkis Izmirlian, as a businessman I understand his concerns. If he feels he is being shafted and that the government – with these secret letters, shady actions and provocative statements – is in cahoots with the Chinese to bounce him, he will continue fighting. Unfortunately, it seems that on certain days the government takes the position that he is expendable; that he is not worth being concerned with and that, in the overall scope of things, he must be the political sacrificial lamb.

Sometimes, based on some of their intemperate statements, it seems that they must be saying “if we vilify the naïve, wannabe businessman, so be it.”

The water has been so poisoned and it is difficult for any of the participants to drink. The management of this disaster can be likened to the management and adjudication of a divorce where all parties feel aggrieved. In such instances, emotions run high and it’s difficult to acknowledge fault in one’s self or rightly quantify fault in the other party. In those instances, an impartial judge is required to make sense of the matter and settle the dispute in as reasonable and fair a fashion as possible.

However, in order to find such an individual, that person would need to understand the merit and contributions of all parties and take that into account. One cannot sacrifice the equity and merit of any party due to preconceived feelings.

The management of this process must take in the incredible urgency of now. Many families cannot survive a protracted fight.

It is inevitable that the credit agencies will downgrade the Bahamas most likely to junk status. Why wouldn’t they? Many businesses have assets tied up in Baha Mar …

The government, Baha Mar and the Chinese must agree on a team of arbitrators. They must all view themselves as three separate parties in this fiasco. The government will not be seen as a fair arbitrator. I advise that they seek a team of no more than three arbitrators that all parties pay for and agree to and simply resolve this matter in our national interest.