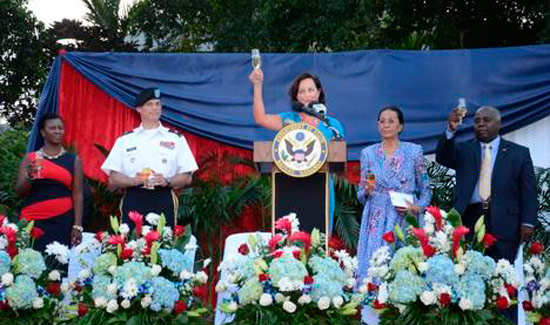 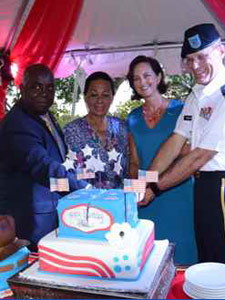 The event was held in partnership with the United States Northern Command (USNORTHCOM) and included more than 500 of the Embassy’s key contacts representing the government, the business community, civil society, media, and the arts.  The evening’s theme, the American Southwest, was a tribute to the spirit and struggle of the Wild West frontier and honored ordinary Americans’ unyielding spirit in the 19th century that served as an inspiration for generations of Americans. 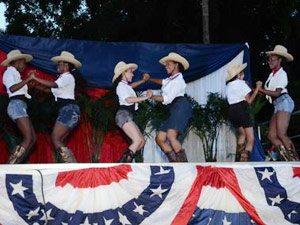 In her remarks, Chargé Johnson highlighted the significance of the occasion, noting that it gives all Americans a chance to take pride in the country’s history and look to the future with confidence.  The Chargé noted that it is also a time to offer gratitude to all those who have sought to advance freedom and lay the foundations for peace and noted the shared democratic values between The Bahamas and The United States.

“Today is not only a celebration of America’s independence – it is a celebration of the common ideals, values and humanity that the nations of the world share.”  The Charge added, “The same idealism, boldness and innovation of the American pioneers who travelled west is alive and well in The Bahamas.” 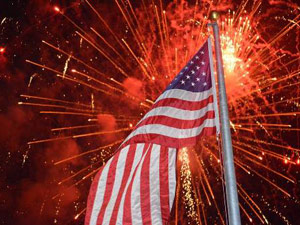 The official ceremony included toasts by U.S. Chargé d’Affaires Lisa Johnson and Governor General Dame Marguerite Pindling to mark the close friendship shared between both countries, presentation of U.S. Colors by the U.S. Marine Corps Nassau Detachment, the official cutting of the ceremonial cake and entertainment by the Royal Bahamas Police Force Band, singer Tebby Burrows and a performance by members of the Harlem Dance Leadership Program.

A grand fireworks display capped off the spectacular evening.

Members of the Harlem Dance Leadership Program delight the audience during the official 4th of July celebration.