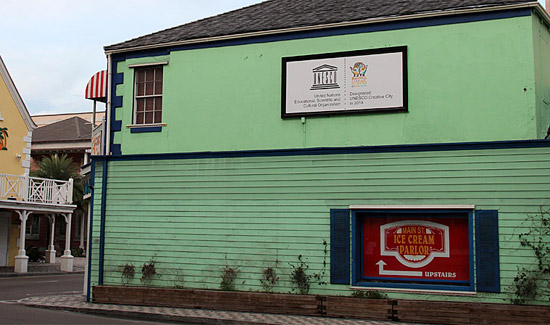 Observant drivers and pedestrians passing in front of the British Colonial Hilton to round into Bay Street, downtown Nassau’s main thoroughfare, will notice a large, framed banner on the second-storey wall of the building just across the way. They should know that this display, erected through a collaboration between Creative Nassau and the Downtown Nassau Partnership, represents two achievements of which all Bahamians should be proud.

The United Nations Educational, Scientific and Cultural Organization (UNESCO) has designated The Bahamas’ capital, Nassau, a City of Crafts and Folk Arts in UNESCO’s prestigious Creative Cities Network (UCCN), which comprises 69 cities from 32 countries with designations in one or more of seven creative fields—Crafts and Folk Arts, Design, Film, Gastronomy, Literature, Media arts, and Music. Nassau has further distinguished itself by being one of the first and only two UCCN members in the Caribbean, the other being Jacmel, Haiti. The aim of the UNESCO Creative Cities Network is to place creativity and cultural industries at the heart of development plans at the local level and to cooperate actively at the international level.

The second great achievement is that of the Creative Nassau organization, which began the application process for the designation in 2008. With straw crafts and junkanoo arts as their focus, the CN team spent the ensuing six years doing the necessary research and writing to demonstrate to UNESCO that the country’s capital was indeed worthy of the accolade. The City of Nassau received the prestigious designation as a UNESCO City of Crafts and Folk Arts in December 2014, which allows the City to display the official UNESCO Creative Cities emblem. Led by husband and wife Jackson and Pam Burnside (current president of the organization), the founding members included Patricia Glinton-Meicholas, vice president; artist John Cox, former UN Ambassador Dr Davidson Hepburn, College of The Bahamas professor Dr Nicolette Bethel and photographer Paulette Mortimer.

“We are extremely proud of this designation which places the City of Nassau on par with cities throughout the world. This has opened up endless possibilities for creative collaborations, resources and opportunities to show how Creativity and Creative Tourism can be of benefit to The Bahamas economically and socially,” stated Pam Burnside, President of Creative Nassau. “Our collaboration with the Downtown Nassau Partnership has facilitated the holding of the Creative Nassau Market in Pompey Square on the second and last Wednesdays of each month. The market showcases the work of skilled local artisans in many fields who are making beautiful artworks, household goods, clothing and accessories, jewelry, drinks, jams and so much more. Locals and visitors to downtown Nassau can now purchase authentic Bahamian products and souvenirs.”

Gevon Moss of the Downtown Nassau Partnership, who represented the City of Nassau at the recent UCCN Annual Meeting held in Kanazawa Japan, added: “As the Downtown Nassau Partnership continues to improve our city, we are recommitted to ensuring that what makes us unique is not only enjoyed by our visitors and locals, but that it also takes center stage. This signage represents an international stamp of approval of our city. It not only certifies how proud we are of our Bahamian culture, but it also showcases how important culture is in defining who we are as a people.”

For further information about Creative Nassau, visit their website at www.creativenassau.com, and the UCCN at en.unesco.org/creative-cities