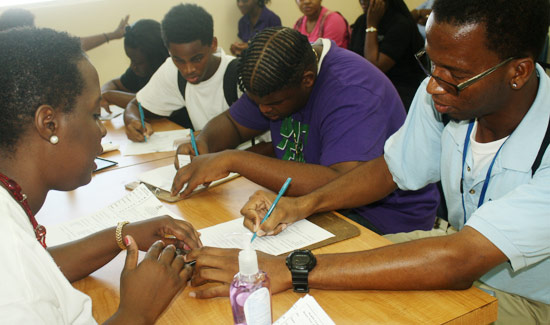 Geneva Johnson tells it like it is. The 19-year-old recognizes that HIV/AIDS is one of the leading causes of death among young people in the country. Hence she recently applauded The Bahamas Technical and Vocational Institution (BTVI) for its campus-wide ‘Know Your Status’ HIV testing initiative. 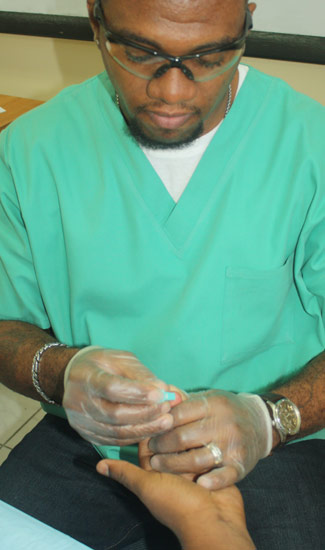 “It’s scary not to know your status. You may be faithful, but your partner may not be faithful. I’m just being real. It’s real out there, and you don’t want to be sleeping with someone who’s wearing a mask,” she said forthrightly.

Geneva was among the scores of students who queued up for the fourth annual event that went beyond testing, but also had informational sessions to strengthen awareness of the deadly disease. Discussions included how the virus is spread and preventative measures – all a part of the educational component to help people make informed decisions.

Health Educator, Emile Lesbott, said it is important to not simply have campaigns that are solely geared towards testing.

“We don’t want to just prick a finger. We want to reinforce what they have heard and undo what they don’t understand. Abstinence is best, but if you are sexually active, protect yourself. It’s an ongoing discussion,” said Mr. Lesbott who has worked with the HIV/AIDS Centre for 15 years.

Nursing Officer, Warren Knowles said in order to reach all populations, it is imperative to conduct such outreach programs.

“We also go to Junkanoo groups, parks and bars. We go into the community because it’s affecting the whole nation. It’s a national epidemic,” said the nurse, who along with 14 co-workers represented the Ministry of Health and National HIV and AIDS program.

There have been inroads though, as according to a Ministry of Health HIV data statement, The Bahamas has experienced success in reducing the number of new HIV infections, as the number of new cases decreased overall by 34% between 2003 and 2012.

Nurse Knowles added though that youth ages 17 to 24 is a target group for the HIV/AIDS Centre, as the rate of infection is high.

Meanwhile, Electrical Installation student, Anthony Parks stressed the need for young people to protect themselves. The 22-year-old expressed concern that too many individuals do not think logically under pressure.

“Some people let their hormones and bodies get the best of them. You have to think before you act. In that moment, people get weak. They don’t protect themselves and regret it afterwards,” said the young man. 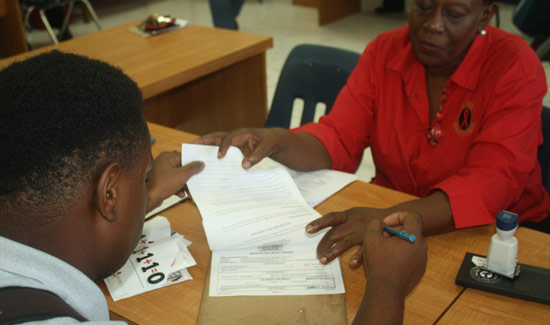 BTVI’s Dean of Student Affairs, Raquel Bethel, noted that BTVI facilitates the HIV testing once per year because it is vital to be regularly tested and know one’s status.

“We unite with our partners to raise awareness. It is our hope that students are encouraged to know their status, and we hope they take advantage of the free test, as information can save lives,” said Ms. Bethel.

Health Educator, Emile Lesbott, has a consultation with a BTVI student during the institution’s recent campus-wide HIV testing day.

Clerk in the HIV/AIDS Centre, Tina Deveaux, assists a BTVI student through the registration process of the HIV testing held at the institution.

Lab Technician at the HIV Reference Lab, Ministry of Public Health, Desmond Ferguson, prepares to prick the finger of a BTVI student who volunteered to know his HIV status.
BTVI students register to know their HIV status during the fourth annual testing day that saw scores of students lining up.