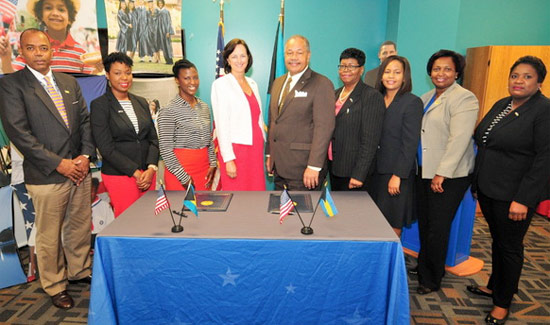 Chargé Johnson thanked President Smith for the great support of the American Corner, expressing her hope that the Embassy and COB can make a tradition of renewing the commitment with a Memorandum of Understanding (MOU) signing each year during International Education Week.

During the meeting, the topics of discussion included the Embassy’s Education USA office, an advising center that promotes U.S. higher education and President Obama’s 100,000 Strong in the Americas Initiative, which seeks to increase educational exchange between the United States and the countries of Latin America and the Caribbean to 100,000 exchanges in each direction by 2020.  The two also discussed the U.S. Fulbright Specialist and U.S. Fulbright Scholar programs.

U.S. Embassy Nassau opened its first American Corner in The Bahamas at COB in July 2013.  American Corner Nassau is a resource center that provides information about the United States, conducts educational and cultural programs, and promotes interaction with alumni of U.S. universities and U.S. government exchange programs.