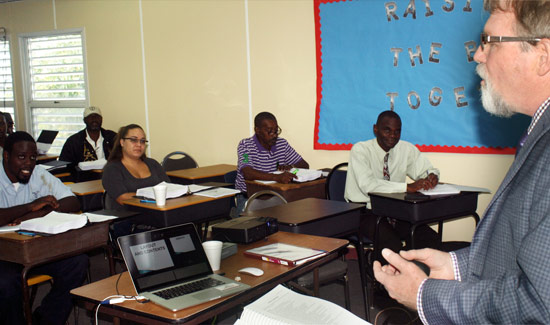 As the Canadian Electrical Code has been adopted by The Bahamas, a two-day seminar was recently held to ensure that local electrical professionals remain abreast of the latest changes.

Near 50 electricians along with electrical engineers, inspectors and engineers, gained invaluable information provided by facilitators: retired Senior Electrical Safety Inspector of the British Columbia Safety Authority, Ivan Pye and an instructor in the electrical program at Vancouver Island University (VIU), Deanna Littlejohn. Both are members of the Canadian Standards Association, which writes the electrical code book.

The codes are amended and republished every three years, and with The Bahamas adopting the standards, the seminar – also held in Grand Bahama – introduced recent, substantial changes.

“We want to make sure new rules are consistent wherever they are used. Within the last six years, there have been massive changes to the codebook, which is all about safety,” said Ms. Littlejohn, who has had her Red Seal certification for 35 years.

The Red Seal certification offered in Canada is internationally recognized.

“They see and implement the practical side, but this seminar brings awareness to whether they are doing it to code. The code is ever changing and it’s hard to stay on top,” she added.

Pointing to the fact that the codes are minimum standards to prevent fires, for example, Ms. Littlejohn noted that some houses in The Bahamas are wired with 120 volts; however, the Canadian electrical code no longer builds houses with that amount of voltage, as the requirement is now 240 volts.

“A home built with 120 volts isn’t going to be able to facilitate the use of all the equipment now available. We have microwaves, waffle makers, blenders and tons of electrical items. If there isn’t enough power, people will figure out ways to work around it and that can cause safety issues like fires,” said Ms. Littlejohn.

Meanwhile, BTVI and VIU are seeking to align their electrical programs. Three years ago, Ms. Littlejohn was instrumental in a gap analysis of the electrical program offered at BTVI compared to that at VIU. Ms. Littlejohn revealed that by fall 2016, VIU intends to have at least two electrical students at BTVI participate in a four-week exchange program at the Canadian university.

“We are hoping to be able to give Red Seal credit to BTVI students for the first year of the Red Seal certification,” said Ms. Littlejohn, who was instrumental in setting up the electrical program at VIU.

“Also, we have been looking at how we might move to certification for Bahamian electricians so they are viable internationally,” she added.

Additionally, at VIU, students are introduced to the code book from the first semester, as the national Red Seal Exam is 55% code. Two students work with a shared, certified Red Seal mentor and over a four year period, they have four levels of apprenticeships before sitting the Red Sea exam.

BTVI’s Dean of Construction Trades and Workforce, Alexander Darville, expressed excitement about the collaboration between the two institutions.

“This is in keeping with our mission ‘To provide learning opportunities that enable individuals to be globally competitive and economically independent.’ Furthermore, it keeps us current with the changes in the electrical field, therefore there is that connection with industry,” said Mr. Darville.

Seminar participants included, but were not limited to, employees of The Bahamas Telecommunications Company, the Water and Sewerage Corporation, Ministry of Public Works, the Department of Correctional Services, Department of Environment and Housing, and Flameless Electrical.