Plant Sale and Show of Horticultural Excellence Set For April 2 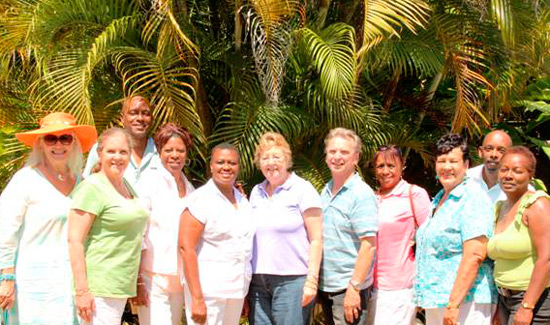 Nassau, Bahamas–The family of Horticultural Society of The Bahamas (HSB) Founder Sara Bardelmeier will do the honours for the upcoming HSB Plant Sale and Show of Horticultural Excellence, set for April 2 at Queens College, Village Rd. from 2:30 to 6 p.m. The presentations are expected at 4 p.m.

THE HSB event is one of the largest plant shows and sales in the area with extraordinary specimens on view, according to HSB President Barbara Archer.

“All over The Bahamas, green thumbs are twitching in anticipation of this show of really well grown and perfectly groomed plants,” advises Show Co-chairman Dail Pearce, a past president. He continues, “Internationally accredited bromeliad judges, including two Bahamians, again will set the bar higher than usual for top prizes at this massive HSB show.”

He is one of the Bahamians among the certified judges, along with David Higgs, another past HSB president and co-chairman of the show. David was a judge at The 20th World Bromeliad Conference in Orlando, Florida in 2012, while Dail clerked. The HSB is an affiliate of the Bromeliad Society International.

* “Decorative Collections” such as Bonsai, driftwood planters, a branch with orchids bromeliads or ferns, plants growing from rocks, topiary, container gardens, water gardens and plants growing in an unusual container including terrariums;

* Fruits and Vegetables and Herbs, collections and single examples;

Show co-chairman and past President Sarah Lobosky points out, “It is a huge undertaking. This show still has seven classes of cut specimens and 14 classes of potted specimens, each with at least 4 sub-classes possible. Plus, decorative collections and others!“

The top award of the event is the Sara Bardelmeier Award of Horticultural Excellence, named for the HSB’s founder and awarded to the judges’ choice as the most outstanding plant in the entire show. Hubert Albury won this in the 2014 HSB Show. The HSB was founded in 1984.

Co-Chairman David Higgs adds, “We urge each of our more than 100 members to take part and ask everyone with a love of plants to come and see the amazing plants that can be grown here.” He points out that every plant in the show must have been in the exhibitor’s possession for at least three months.

Past Presidents Dail Pearce, David Higgs and Sarah Lobosky are co-chairmen of the HSB Plant SALE and SHOW of Horticultural Excellence. Other members of the HSB show committee include: