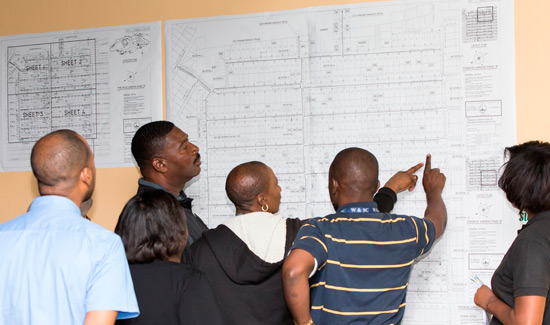 Nassau, Bahamas – At a public meeting held at Cleveland Eneas Primary School last week by the Water and Sewerage (WSC) Corporation, along with Khaalis Rolle, Member of Parliament for Pinewood, it was announced that works to provide city water services to the residents would start March 14th, 2016.

In late December last year WSC signed a $2.66 million contract with APEX Underground Utilities & Construction Co. Ltd. (APEX) for these works which include the supply and installation of a piped potable water supply system to service approximately 740 properties. This project is part of a $41.63 million Caribbean Development Bank (CDB) Water Supply Improvement Project that includes a $28.33 million loan from the CDB and $13.3 million in counterpart from the Government of The Bahamas and WSC.

“I am so grateful for the Water and Sewerage Corporation. It has been over thirty years, since 1984, that I have been waiting for city water,” said Myrtis Turnquest, a resident of Cottonwood Street, who attended the public meeting. “For years my daughter had to supply me with cooking water. Even some of my close friends have moved due to the wait when it comes to receiving city water, but I am thankful that I am here today to finally receive it. I am so happy and can’t wait!”

The water mains project for Pinewood Gardens is expected to continue into November of this year. The public meeting allowed the residents to see the plans for the work and speak to WSC and the contractor, APEX. Residents also had a chance to ask questions and share their comments or concerns.

“The Corporation was extremely pleased to host the town meeting to meet with the residents of Pinewood Gardens and to inform them that works will commence in the coming days to provide a piped potable water supply system for their community,” said Robert Deal, WSC Deputy General Manager. “This area includes approximately 739 lots of which 634 have occupied homes and other buildings such as apartments and churches. In addition, another 18 lots have buildings under construction.”

“This area is perhaps the largest single area in New Providence without a piped potable water supply system, with all of the residents depending on private well water for their water supply and using septic tanks for their sanitation needs,” he noted. “ It is anticipated that this project which will cost approximately $2.66 million, upon completion, will significantly improve the quality of life for the residents by providing them with high quality piped potable water that meets and surpasses all local and international public health requirements.”

Also on hand at the town meeting were WSC customer service team members, who have been working with the residents to sign them for the new water services. WSC encourages all residents of Pinewood to visit their social media pages or website to keep up to date with the on-going improvements.

The Water and Sewerage Corporation was established through an Act in 1976 with full responsibilities for managing, maintaining, distributing and developing the water resources of The Bahamas.

The Corporation has a team of over 400 dedicated employees in New Providence and the Family Islands, committed to the growth and excellence in service quality, which is the key driving force that guides and sustains the relationships with customers, employees, and communities served by the Corporation.

Through a loan with the IDB in 2011 the Water and Sewerage Corporation has developed the WSC Support Program to address Non-Revenue Reduction, WSC Institutional Strengthening, Rehabilitation and Upgrade of Wastewater Infrastructure and Preparation of a Wastewater Treatment Master Plan and an upgrade of the Legal and Regulatory Framework. The Support Program will ultimately improve the quality of water and service to customers.

At a public meeting held at Cleveland Eneas Primary School last week by the Water and Sewerage (WSC) Corporation, along withKhaalis Rolle, Member of Parliament for Pinewood, it was announced that works to provide city water services to the residents would start March 14th, 2016. This area includes approximately 739 lots of which 634 have occupied homes and other buildings such as apartments and churches.  In addition, another 18 lots have buildings under construction.