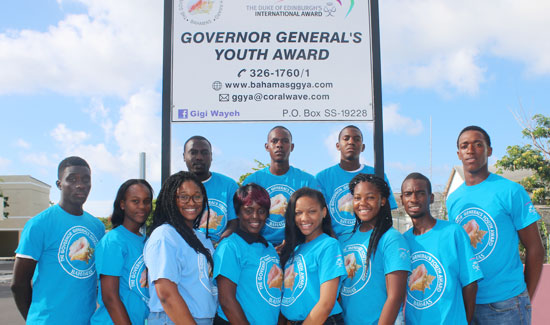 When Aquinas College student Rajeyve Smith joined the Governor General’s Youth Award in tenth grade his main goal was to sharpen his leadership skills to aid him on his journey to ultimately becoming an educator and authority figure.

He had no idea the youth programme would allow him to see how other countries and people live and force him to push the boundaries of his physical strength.

“I want to be a teacher and I felt GGYA would be good for my personal development,” said the 2016 graduate. “This is the program for people who want to put themselves in a different environment and become more self-reliant.”

Smith and 11 others involved in the Governor General’s Youth Award are in Trinidad and Tobago for the Caribbean Award Sub-Regional Council (CASC) Adventurous Journey 2016.

The event, code name “Trinbago Callaloo Adventure,” runs from July 23 to August 8. Around 200 participants from 13 Caribbean countries will explore that most southern island in the Caribbean archipelago.

Their adventurous journey won’t be without its share of uphill climbs. It will also encompass rambling trails, a succession of small ridges and at least two beautiful beaches (the Petit Tacarib and Grand Tacarib).

The four day/three nights adventurous journey portion is expected to amount to eight hours of purposeful, physical activity daily – or a minimum of 32 hours of exertion – all the while carrying around one quarter of their body weight on their backs.

The expedition will take participants along the north coast of Trinidad from Matelot to St Joseph. Participants will get to travel to one of the most pristine sites in Trinidad, Madamas Bay, a nesting ground for the leatherback turtle – a protected endangered species.

Expedition teams will also experience one of the country’s most spectacular waterfalls, The Paria.

If successful, the trip will net its Bahamian participants a coveted Gold Award from the local version of the Duke of Edinburgh’s International Award – a challenging three-tier award programme which encourages youths between the ages of 14 to 24, to get active, gain new skills and develop a volunteer spirit.

“I feel prepared for this trip,” said 18-year-old Smith who for months walked from his home in Garden Hills to his school on Gladstone Road, in addition to walking along the beach with 15 pounds weight in order to increase his stamina.

Since joining GGYA, Royal Bahamas Defence Force (RBDF) Rangers, retired Batalion Commander D’Quan Smith has felt the physical change in his own body. He believes he logged more miles walking with the GGYA than with the junior defence force.

“I’m prepared mentally and physically for this trip,” said 19-year-old Smith, who joined GGYA to fulfill a Ranger officer requirement. “I’ve come too far to quit.”

“This program has afforded me the opportunity to see a different Bahamas,” said Ranger Smith. “My most memorable moment is going to BASE [Bahamas Award Scheme Expedition] in Inagua in 2014. It wasn’t my first Family Island trip but it was the first time I saw flamingos and wild donkeys in their natural habitat.”

For 2015 Hope Academy graduate, Claysandra Morley, the youth programme has drilled in her the need for time management. While on practice and qualifying expeditions participants literally have 30 minutes from the time they are awaken to break camp and begin their hike.

The 18-year-old has only two minor worries associated with the CASC trip, what to eat and who will form part of her expedition team.

“I’m a picky eater so the most difficult aspect of the programme is eating the food we have to cook outdoors. I carry a lot of snacks,” said the slim-built, 18-year-old.

“Since they mix the groups up, I’m also just a little anxious about who I’m going to be hiking with but I feel I’m able to work within any team setting.”

If Morley has twinges of anxiety, 2016 Prince William graduate, Raven Pennerman is just the opposite.

“We have been waiting for this trip for so long. I’m ready to show what we’ve been working on and training for. I’m pretty excited,” she said.

“I’m looking forward to interacting with people from different countries, having new experiences and taking in the culture and sights since I’ve never been there before. This programme gives you experiences which you aren’t going to get in a classroom setting.”