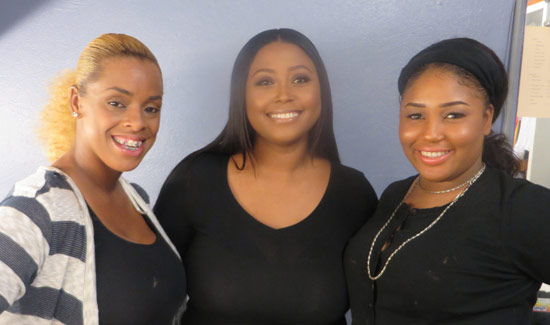 The Bahamas Technical and Vocational Institution’s (BTVI) partnership list is growing, with the latest being James Catalyn and Friends. Two students of the institution’s summer makeup course got the opportunity to work backstage at Summer Madness 2016, gaining experience and exposure.

Claudeenah Clarke and Alicia Turnquest were fresh off their Face Care and Makeup Artistry Course I at BTVI, when instructor Torkel Dawkins, owner of T’s Artistry, gave them the opportunity to be exposed to stage makeup for the theatrical production.

An animal trainer at Dolphin Encounters, Claudeenah has been interested in makeup artistry for years, and jumped at the opportunity that was presented. 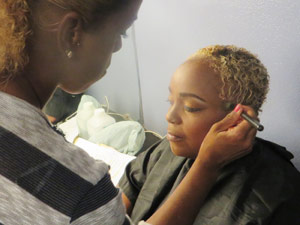 “It’s an awesome feeling to do something I love, but also to get the exposure and the experience at the same time,” said Claudeenah.

Although stage makeup was not taught in the five-week course, the young woman said she learned enough to prepare for her recent gig.

“Ms. Dawkins taught us to improvise and to know how to go from day makeup to night makeup, and night makeup can basically be used as stage makeup as well. All of the ladies in the classroom were really good in the end,” she stated.

James Catalyn and Friends theatrical troupe has thrilled audiences at The Dundas for the past 34 years, taking a satirical look at Bahamian life. Mr. Catalyn underscored the importance of good makeup artistry for stage production.

“It brings out the character of the person. When you get on stage, the stage lights flatten the face, so if it is an old person, the lines on the face need to be a little more prominent. It’s a big difference between stage makeup and wedding or party makeup. You have to outline a lot of things,” said Mr. Catalyn.

“If you don’t put on the right makeup, you don’t see the eyes; you don’t see the mouth. For example, there was a famous actress, Joan Crawford, who had a very narrow mouth and very, very thin lips. So when they did makeup on Joan for the movies, they did heavy lips and they widened them. It’s very important,” he explained.

As stage director, Mr. Catalyn lauded BTVI for agreeing to the partnership, which was initiated by Jevon Butler, president of the theatrical company. 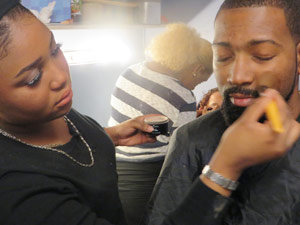 “It’s very nice to have BTVI here. The arrangement has paid of. BTVI is doing a tremendous job. They go unnoticed. If young reporters knew, they would go and look for stories and interview the students and teachers at BTVI,” said Mr. Catalyn.

Additionally, Ms. Dawkins has shown confidence in the students under her tutelage, by inviting them to be a part of the production.

“I have been taking Alicia out to assist me. She has done three weddings with me so far, so she’s learning very well so far. She really wants to make this a career and I encourage her. I have three assistants on my payroll, but there have been times when all three of them were unavailable. I tell any of my students who are progressing very well, I’ll let them come out with me, and they get paid,” said Ms. Dawkins.

Meanwhile, Claudeenah said although applying making can take up to 45 minutes, as a result of the number of faces she had to work on for the production, she allotted about 20 minutes for each.

“It does take time to create. It’s an art,” she stated.

“Our makeup artists are talented and Summer Madness 2016 gave them an opportunity to display their talents under the bright lights. They have now been exposed to a brand new arena in which to offer their services, and they now have a new addition to their growing portfolios,” she stated.

“Each face on stage during the production represented much more than just a well-made-up face; it represented a BTVI product by very skilled BTVI students. We are grateful for the opportunity to have participated,” said Ms. Thompson.

BTVI makeup artistry student, Alicia Turnquest, swipes her brush across the face of a male actor of the James Catalyn and Friends’ Summer Madness production.