Giving Back And Looking Forward 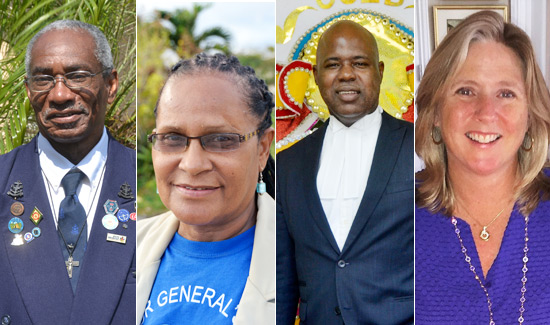 It was the best and worst of times.

The world watched a young Mel Gibson in Lethal Weapon and listened to Whitney Houston’s hit song, “I Wanna Dance With Somebody,” all the while The Bahamas remained locked in the death grip of a flourishing, illicit drug trade.

It was a mixed bag decade, one marked with upheaval. The year 1987 was no exception. It was into this environment that a reinvigorated Duke of Edinburgh’s Award (later renamed the Governor General’s Youth Award) was relaunched in The Bahamas. This year marks its 30th anniversary, an event that is much more than a milestone; it’s a starting point for exciting new initiatives.

Looking back
In the 1960s the UK-based Duke of Edinburgh’s (DofE) Award programme existed on a small scale locally, predominantly at the elite St Andrew’s School and was offered at select Boy Scouts and Girls Guides troops. The programme hinged on teachers’ and volunteers’ involvement. Thus, it lacked continuity.

Back in 1986, 22-year-old Rosamund Lambert (later Roberts) was the information and commercial secretary at the British High Commission Office when an official from the Duke of Edinburgh’s International Award came to visit.

“He wanted to see if we could get the programme restarted in The Bahamas,” she recalled. “I was the press officer. I was excited by it all. I was looking to become involved in a youth project. The timing was amazing.”

The criteria and structure of the Award are “simple and enduring,” as the Handbook for Award Leaders describes. “Voluntary and non-competitive it is open to anyone aged 14 to 24. Essentially, youths design their own program, set their own goals and record their progress in a service, physical and skills activities.”

Participants must also complete adventurous journey (hiking expeditions) and, for a Gold Award, take part in a Residential Project (a meaningful community service initiative completed away from home).

Like all similar organizations it took time to set-up the Duke of Edinburgh’s Award infrastructure locally.

“We had to locate, motivate, train people, find funding and get a Board of Trustees going,” Mrs Roberts recalled. “The programme required a lot of education. It was fairly complex to deliver since it required precise training for our leaders. We also had to build up equipment for the expeditions. Those things took time.”

In those early days funding came by way of the DofE World Fellowship. Created in 1987, its objective is to recruit major, international supporters to help extend the Award’s global reach. Portions of their funding go to the individual’s host country.

“It helped that the International Award office came out to assist with the World Fellowship funding. They got six or seven World Fellowship members out of The Bahamas and that was our seed money. There was no government support back then,” Mrs Roberts recalled.

The Bahamas first World Fellowship member was merchant banker and businessman, Robert Nihon. A Canadian expat, he accepted the invitation to serve as chairman of the Board of Trustees for the local programme. With a view to creating a sustainable youth organization the businessman cherry picked board members, selecting individuals who were qualified and engaged.

A prominent philanthropist, Mr Nihon possessed a track record for spearheading successful ventures whether it was in financial services, mining, real estate, or technology. The businessman recognized the importance of having the right people around the table if the programme was to not only survive but thrive.

An intensely exciting programme, growth came steadily, but slowly. The first batch of participant was recruited from the Police Cadets, Girl Guides, Boy Scouts and Boys Brigade. For the most part, organizations with some knowledge of the programme’s worldwide reputation.

One enduring unit has been the 23rd Bahamas Company of Boys Brigade. Established in 1970, the unit is attached to St Barnabas Church.

“When the Duke of Edinburgh Award programme came on stream in 1987, we looked at it as a programme to enhance Boys Brigade,” said the company’s captain Henry Curry, who, like Roberts, was involved with the programme from its reconstitution. Back then the father of six (five boys and a girl) was 43.

“Like the Duke of Edinburgh Award, our company camped out. So that and the discipline attracted us. Back then and now, young boys are looking for father figures. If past members would volunteer we would make a positive impact on crime,” said Mr Curry, who at 73 still leads the 23rd. He estimates that his company has funneled more than 100 boys through the self-development programme over the last three decades.

One of the Award programme’s earliest participants is Rodger Thompson. In 1988, Thompson was tenth grader at Bahamas Academy who resided on Solider Road with his aunt.

“Some of the other boys my age in the neighborhood were getting into trouble. They had idle hands and idle time,” recalls Mr Thompson, who joined DofE Award via the Cadet Corps Programme of the Royal Bahamas Police Force.

“The Award kept me focused with positive activities – learning new skills like carpentry and locksmith, engaging in martial arts all the way up to a black belt, and cleaning up communities for my service. I was so consumed with that it was no time for me to be idle and get into mischief.”

The youth programme opened doors for the then 16-year-old. “It exposed me to things I would have never seen. I traveled through many countries (Dominica, Grenada, Puerto Rico). I made friends with persons from almost every country in the region and outside the region (UK, Israel and Jordan). Many of my friends I made back then hold prominent positions in their country today,” said Mr Thompson, a prosecutor with the Attorney General’s Office since 2011.

“I believe it is the best programme this country has ever seen. If I had my way I would make it mandatory.  I believe the crime level would drop.”

Barreling Forward
Thirty years, 10,000 participants and 8,107 Awards later, the Governor General’s Youth Award is arguably the leading national youth programme with 52 units on eight islands. According to the latest figures available, there were 1,426 persons registered for the Award programme this year.

“I’ve always thought of the programme as my baby. It has grown with me,” said Mrs Roberts, who is 52. “I always hoped it would be this national program but to see where we are now with the government support and the reputation it has built is phenomenal. I could not envisage where we are today. ”

Without hundreds of volunteers and scores of financial supporters through the ages, the Award would not have been able to transform so many lives helping youths and young adults to develop confidence, resilience, conflict resolution and problem solving skills, said the programme’s national executive director, Denise Mortimer.

“The Award operates on the premise that not all learning takes place in a classroom setting, as such, the programme plays a vital role in equipping youths with essential life skills to make a difference first in themselves, secondly the community and ultimately the world,” she said.

Chief amongst the programme’s impact is the social responsibility it fosters. Over the last 30 years, participants have volunteered more than 135,000 hours of community service, according to the national office. Bronze, Silver and Gold participants must complete 12, 24 and 60 hours of community service, respectively, in order to receive their Award.

“Participants have volunteered in clean-up campaigns from the coast to inner city communities,” said Ms Mortimer. “They have mentored, tutored and coached. They have lent a helping hand at orphanages, nursing homes, soup kitchens, animal shelters and other charitable organizations throughout the length and breadth of The Bahamas.”

Taking stock
Still, one doesn’t go from zero to 30 without recording a number of milestones. In 1990, The Bahamas was the first in the Caribbean to hire a national executive director, which was Janet Cartwright. His Royal Highness Prince Edward paid his first visit to the reinvigorated local Award programme that very year.

In 1992, the first batch of Gold Awards under the new program was presented. His Royal Highness Prince Philip came to town to bestow those honors. Growth continued that year with the establishment of the first Family Island units and the first national family island adventurous journey, christened The Bahamas Award Scheme Expedition (BASE).

Two years later the DofE was the recipient of the Ministry of Youth, Outstanding Youth Programme Award. The very next year, in 1995, the DofE hosted the Caribbean version of BASE drawing participants and volunteers from across the region to The Bahamas to attend the Caribbean Award Scheme Council (CASC) Annual General Meeting and Adventurous Journey.

In 1996, the program changed its name to its current moniker, the Governor General’s Youth Award with Sir Orville Turnquest as its patron. As a part of its face-lift, GGYA launched a new logo and published its first GGYA booklet.

“In the mid-90s it become quite apparent the name was holding us back,” said Mrs Roberts in explaining the thinking behind that crucial decision. “It was not local and sounded elitist. We changed the name and that helped us to build further.”

In 1997, the programme’s outstanding achievement was recognized yet again by the Ministry of Youth. Amongst GGYA’s other accomplishments were its first leaders conference in 1999 and obtaining full membership in the Duke of Edinburgh’s International Association in 2000.

GGYA experience a growth explosion in 2003, when for the first time the program registered 1,000 participants in a single year. The following year it opened its first office in Grand Bahama to further capitalize on its growth. In 2006, a young offenders unit was created to reach at risk youths.

A watershed year was 2010. Realizing the impact of the self-development programme the government committed itself to a multi-year partnership providing a critical financial injection via the G.O.L.D Initiative, a Ministry of Youth, Sport and Culture funding mechanism.

The government’s goal is to make the program more national and inclusive in scope. Delivering on that mandate, GGYA awarded its first batch of medals to special needs student of Grand Bahama’s Beacon School in 2012.

In 2015, participants began to redefine the adventurous journey component. Breaking with tradition, GGYA recorded its first kayaking adventure (around New Providence) and the first cycling expedition (on Grand Bahama).

Forward thinking
“This is an exciting time to be involved in the Governor General’s Youth Award whether you’re a participant or a volunteer,” said Ms Mortimer who believes an anniversary is a time to reflect on the past and look to the future.
“The need for the programme is just as intense today as it was 30 years ago.”

Amongst her other duties the national executive director, who has served for 25 years, is not only preoccupied with succession planning, but also charting a course for future growth. She sees expansion opportunities in the northern Bahamas.

“Looking to the future we’d like to see even more individuals who have benefited from the program return either as a volunteer, financial sponsor or both,” says Ms Mortimer. “GGYA is more than a tradition, it’s a lifestyle.”