Christie Now Has a Legacy: LOSER! 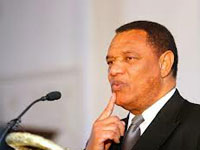 The Bahamian people yesterday used the Free National Movement (FNM) as a vehicle to send Perry Gladstone Christie home once and for all.

Our economy has not grown in four years; Christie’s Progressive Liberal (PLP) promised to solve the crime problem and it escalated; dump fires worsened; there was open corruption in the government; Christie went against the will of the people in the gambling referendum; the electricity system in New Providence went into meltdown; he introduced the largest tax in the history of The Bahamas and was about to add to that with a National Health Insurance tax; he stuck up his middle finger in front of his people; he fell asleep in public places wherever he went.

Christie has been searching for a legacy his whole time as prime minister. He has one now. He is the man who ruined the PLP. He has left the SS PLP on a reef, broken, with many political fatalities. Most of the PLP’s Cabinet lost. It was difficult to confirm what seats they won, actually.

What they did in this election was tell him they no longer want to hear from him. If after the recount it is confirmed that he lost his seat, he won’t even be allowed to give a farewell address in the House of Assembly.