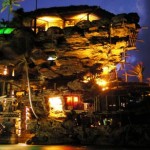 A bitter dispute that has been simmering below the surface for years finally exploded this week when police raided the Lyford Cay home of billionaire American financier Louis Bacon, 52, apparently based on a complaint from his neighbour, 66-year-old international fashion mogul Peter Nygard.

Ten armed plainclothes police officers entered Bacon’s home just after noon on Monday in search of lethal “ultrasonic weaponry”. Although the owners were not present, police handcuffed and body-searched household staff for over three hours, before confiscating a set of industrial loudspeakers. The speakers were returned the same day.

But this is not just a passing spat between two high-profile investors. Insiders say there is a wider long-running controversy which has serious implications for the rule of law in the Bahamas, and has raised concerns at the highest levels of government.