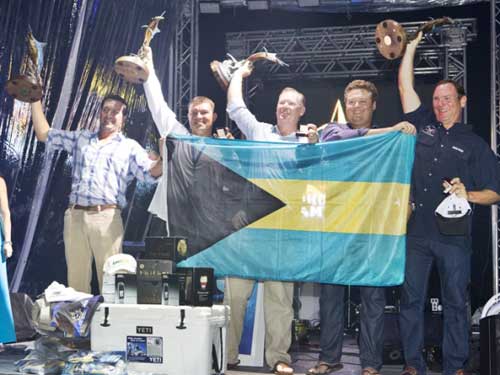 After an amazing final day tally of 15 sailfish releases and one 27lb dolpin team 33 roars up from 14th place on day three to capture the championship by a mere 27 points! Congratulations to our 2013 OWC Champions Paul King, Roger Gutierrez, Jimmy Bernard, Keith Kelty and Geoffrey O’Connell representing the Lyford Cay Offshore Tournament.

In its very first year in Costa Rica, the Offshore World Championship hosted 67 teams from 31 different countries who had earned the invitation to the event by winning one of the 120 Qualifying offshore tournaments held around the world. The 324 anglers experienced a record setting bite for the tournament, recording 821 billfish releases, including 811 sailfish, nine blue marlin and one striped marlin.

To earn points, teams were required to video the releases of all billfish and could weigh a maximum of two game fish per species per day of tuna, wahoo or dorado over the minimum 25-pound minimum weight.

Every team in this year’s event recorded at least two sailfish releases, with the fleet averaging 12.25 releases per team for the event. The beautiful Parador Hotel served as the host for the boat draw, rules meeting and festive kick-of party where participants and guests enjoyed dinner, local dance teams and a live music.

During the four days of fishing anglers boarded the quality fleet of Costa Rica charter boats at the new Marina Pez Vela development. This was the first time that over 80-percent of the charter fleet in Costa Rica gathered at one location and the tournament represented the largest offshore catch & release competition ever held in Costa Rica.

After a fantastic day on the water the teams were greeted with a spectacular dockside social, including the Flor de Cana rum and model station, a frozen margarita station, the MPV beer station, live music and food provided by Villas Lirio.