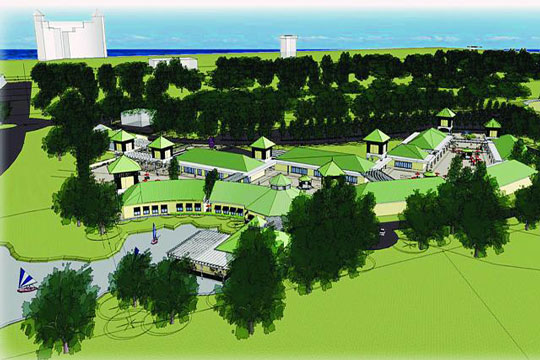 A village-style shopping center is preparing to break ground right on the doorstep of Baha Mar.

The Towers Shopping Centre, a $40 million venture, has received strong interest from the corporate community since going to market.

Not so unlike Marina Village on Paradise Island, the high-end development seeks to capitalize on the $3.5 billion mega resort rising in the distance. The Towers is located just beyond the golf course along the new Baha Mar Boulevard, stretching all the way down to John F. Kennedy Drive.

“It will be overlooking Lake Cunningham to the west, and of course it is on the new boulevard,” he told Guardian Business. “The entire development is 20 acres. Some of the acreage is divided into parcels of other individual businesses that might want larger operations, such as a bank. We are talking to a movie theater group and office buildings will definitely be going up.”

Christie added that a health and wellness center is also being planned, whereby tourists or local residents can exercise, shop for particular food and vitamins and receive massages and other treatments. The development will break ground in three months, he explained, and should open around the end of 2014 to coincide with Baha Mar.

Robert ‘Sandy’ Sands, the senior vice president of administration and external affairs at Baha Mar, agreed that the mega resort’s rise will create many entrepreneurial opportunities for western New Providence.

“It should raise the profile of Cable Beach and the western side of the island at large,” he said.