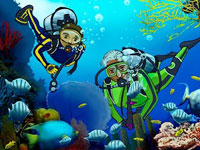 Willy Wonka and the Chocolate Factory’s “Pure Imagination” was the hidden soundtrack to a conversation with artist Jace Mckinney on a recent morning. In his studio at Popopstudios he took a break from a painting he was working on to talk about the genesis of his creativity. The painting, falling into the category of what he calls his “serious” work, is an aerial view of monochrome rows of little houses lining jam-packed streets. The familiar scene is cleanly intercepted by the aquamarine coastline of the island idyll the town is supposed to be.

But clues to his current interest lay around the sunlit room. A little bookcase near the door held volumes like Maurice Sendak’s “Where the Wild Things Are “and Kyle Baker’s graphic novel” Nat Turner.”Paintings of one of his characters in the making a sweet-faced little girl with a low afro, a straw hat and an anonymous but significant place in history hung on the walls. And a well-used digital drawing tablet sat in front of his laptop.

Mckinney, 26, launched into the story of how his older brother taught him to draw his very first muscle, and the music that should have been there swelled, inviting you into his world.

“I used to draw these guys with hundreds of little muscles on their arm,”McKinney remembered.”You know how they had the bicep?I had a row of 10 biceps. My brother was like,’That’s not how you do it. I’m going to show you how to draw a muscle.'”

His brother whipped out the muscle in three deft strokes. Afterward,”I drew muscles on everything,”McKinney said.

His was an imagination filled with larger than life muscle men stomping through the clouds, and it was one that resurfaced throughout his life.

“I remember having a class with John Cox and he said draw whatever you want,”said McKinney of his years at The College of The Bahamas.”I drew this giant dude who had like a 10-pack and muscles out of the world.”

College was also a time for examining unpleasant realities. McKinney once did a series for a class exhibition based on homelessness in Nassau in 2003. He invited Andre Chappell, a former drifter who once roamed the Oakes Field area, to the exhibition as the living example of his paintings. Chappell held a cardboard containing McKinney’s artist statement in his hands.

“I knew that I wasn’t going to cause change overnight but it was something where I was just interested in pulling people out of their comfort zones,”he said.

McKinney went on to tackle other social concerns, including environmental degradation and the effect of tourism and foreign direct investment on local culture.”Foreign Enterprise,”a mixed media painting of a headless man backed by a cruise ship and a black hole that incorporates pieces of wood and barbed wire, hangs in his studio, along with one of the paintings of his homeless series.

Now as an illustrator his vivid drawings color newly launched Bahamian children’s book”Lenny and the Big Yard”by Natasha Turnquest McKinney feels he has come full circle from his brooding years.

“I am very much interested in exploring the lighter aspects of my work because I think that has more of an impact with me and with other people, “said the artist. He produced 12 illustrations and several doodles for” Lenny and the Big Yard,”which is the first in a series of books set to take its main character on adventures throughout The Bahamas.

Turnquest called his work “brilliant”in a recent interview, adding that McKinney captured the essence of the story she told.

For the artist the journey back to his childhood impulses took a new turn at the Rhode Island School of Design. There he majored in sculpture but explored film, performance art and illustration as electives.

“I felt that the canvas was just something that was very constricting,”he said of his choice of sculpture and other media.”I noticed that moving out into your environment you could engage people more, you could really grab one and touch them.”

Driven by the stories that came to him day and night, McKinney, who pairs writings of his own with his illustrations, moved closer to the genre.

“When I went into illustration it was just like the world opened up to me again, “he said.

He worked on an animated series with a cousin in New Jersey after graduating from Rhode Island before attempting to strike out on his own in December 2008. The debilitating economic recession made it difficult for McKinney to find work in his field. After using a portion of his Optical Practical Training year to work with a construction company in redesigning homes, he returned to The Bahamas last September. One of his first jobs an exchange in kind for exposure through Shakespeare in Paradise’s artist outreach program was to create posters for the theatre festival’s productions of “The Tempest” and “One Black One White.”

McKinney scored the “Lenny and the Big Yard” job through his work for Shakespeare in Paradise.

“As soon as I met her we kind of clicked,” he said of meeting Turnquest, the children’s book author. “It was just a really honest relationship in terms of how we felt. It wasn’t pretentious at allâ ¦and it went really, really smooth.”

The successful project has since fueled McKinney’s longtime interest in telling the nation’s stories, particularly to its children. He has characters and storylines waiting in the wings.

“I feel very comfortable with doing those things, in having a purpose to my art, ” he said. “It’s moved beyond, for me, just a piece that you can just discuss and just walk away from, but it’s more of a piece that can be a part of someone’s memory …

“You remember the things of your childhood.”