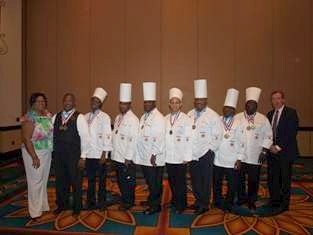 Making it into the elite of the region’s culinary teams, the Bahamas was recognized as one of the top finalists in the region which competed at the Taste of the Caribbean Culinary Classics held at the Rio Mar Wyndham Grand Resort in Puerto Rico.

The team walked away with a gold medal, yielding only to Barbados and Trinidad and Tobago, which edged them out for the top awards.  Members of the team came away with individual medals, capturing six awards.

The gold award was a significant accomplishment for the team, which was judged by a panel of international experts during the three day competition sponsored by the Caribbean Hotel and Tourism Association.

“We are extremely proud of our team, the way in which they competed, the high quality of their food and beverage, and how well they represented their country and their hotels” states Frank Comito, Executive Vice President of the Bahamas Hotel Association and DeAnne Gibson, Manager for Culinary Tourism for the Ministry of Tourism and Aviation.  Both organizations sponsored the team in cooperation with the College of The Bahamas and the Bahamas Culinary Association.

Capturing an individual silver medal in the overall chef’s competition was Executive Sous Chef Emmanuelle Gibson from the One and Only Ocean Club who finished third overall out of 33 chefs vying in that category. Other members from The Bahamas team finishing in the top twelve and capturing Bronze medals included:  Richmond Fowler from the Lyford Cay Club and Clement Williams from Kerzner International.

Competing in international competition for the first time as an alternate and member of the team was Gia Wilson, from the Sheraton Cable Beach Resort, who played a pivotal role during team preparation throughout the event.

This year’s competition included a category for Junior Chef.  Wendy Miller, an apprentice chef with Kerzner International was awarded a bronze medal for her achievement.

Team Manager Chef Devin Johnson from the Sheraton, who worked closely with the team over the past several months commented on the team’s performance:  “The judges were impressed with our teamwork, our sense of organization, our professionalism, and the way in which we blended a variety of foods and spices to create dishes which were international but clearly identified with The Bahamas and the region”.

The Taste of the Caribbean competition is sponsored by the Caribbean Hotel and Tourism Association.  The Bahamas team’s participation was made possible thanks to the support of BHA, the Ministry of Tourism, the Bahamas Culinary Association and the College of The Bahamas and team member’s hotels.   Their participation was also made possible thanks to the generous support of Bahamas Food Services and the tremendous support from the Lyford Cay Club which hosted a gala fundraising dinner.