BTC Rate Reductions Coming Soon to a Cell Phone Near You 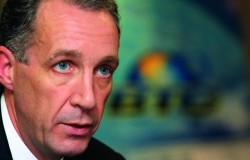 Rate reductions for mobile services could come as early as July as Cable and Wireless Communications (CWC) begins to roll out some of its plans for the Bahamas Telecommunications Company, BTC CEO Geoff Houston announced yesterday.

The rate reductions depend on approval from the Utilities Regulation and Competition Authority (URCA).

“I would like to tell you what they are today but unfortunately we have yet to get final approval from URCA. But suffice it to say we are really excited that we will start to really bring down the cost of mobile calls in The Bahamas very, very soon.”

BTC’s vice president of marketing Marlon Johnson noted that the approval process takes about a month for rate reduction applications.

“So starting at the end of June, you’ll start to see us roll out promotions for rate adjustments,” he said.