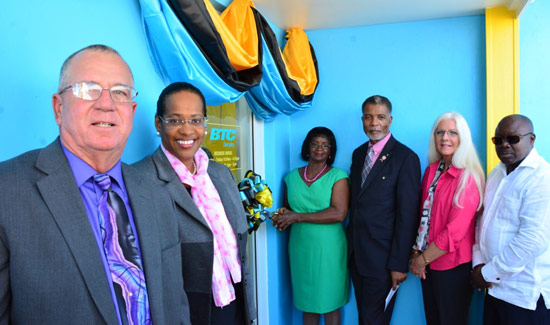 Regardless the size of the island or its community, BTC is giving the same retail opportunities, products and services in new and glamourous, full-service BTC stores throughout The Bahamas. The island of Spanish Wells is one such example, and Main Street was in a celebratory mood when BTC CEO Leon Williams led a BTC team to the store re-opening on October 29th.

Mr. Jolton Johnson, Senior Administrator, North Eleuthera district welcomed them and thanked the BTC CEO for the new store, which he said built on the community spirit of the island whilst boosting the local economy by way of employment.

Senior VP Customer Operations, Patricia Walters with responsibilities for new store roll outs, recounted her earlier trip some months previously when she made a pledge that all three districts in North Eleuthera would have modernized BTC stores.

“I found on my trip here that the stores were not up to standard and made a pledge on behalf of BTC that Eleuthera would be one of the first renovation projects following completion in Nassau.; and I’m very proud to be here today to say that promise has been fulfilled.”

Ms. Walters drew the attendees’ attention to the modern and distinct Bahamian-themed design and décor and the colourful mural by local artist Gloria Pinder depicting island life. She likened the modern BTC product displays to those found in the much acclaimed Apple stores.

“We’re not too dissimilar to the Apple stores in the way we showcase our products; we are modern and best in class.”

She said that the days of secured phones behind bullet-proof display glass were over, and customers could now touch, feel the weight and test phones at will.  The VP said the same range of phones in their Nassau stores was also available in Spanish Wells.

“You can touch and feel the products, or test broadband to experience the speed and also play games with your children on the internet via BTC hi-speed broadband to see what it is like to have data at home.”

Robert Roberts, Deputy Chief Counsellor-Local Government Spanish Wells spoke on telecommunications on Spanish Wells, and recounted his BaTelCo memories of the switchboard system and the operators who connected each call.

“I cannot imagine where technology will take us over the next 40 years. As you can see, BTC has gone all out and added value to the community with this new store. I commend them for keeping us on the leading edge of technology, and we look forward to tomorrow and what it may bring.”

BTC CEO Leon Williams chose to speak on Bahamas and Spanish Wells history for the attendees and stated that The Bahamas has witnessed many ‘firsts’.

“We have a history of many ‘firsts’ here in the Bahamas. The first time of day machine installed in the Caribbean was installed here in The Bahamas. Also, while all other islands of the Bahamas had slavery, Spanish Wells never entertained the practice.  Spanish Wells is unique also in its supply of both pink and white sand, and the water here is so clear you can see your shadow on the bottom of the seabed.”

Mr. Williams also recounted the early history of telecommunications noting that The Bahamas always lived on the cutting edge of technology.  He concluded with a view of the future.

“Come next year we will start IP TV testing for television services and provide IP TV as a second choice. Meanwhile, we are returning to Eleuthera to install more cell towers, to strengthen service so that you can get a better signal, especially in Spanish Wells, Russell Town, and in the Bluff. We will bring you a 4G network with LTE, and you will get IPTV.  So, coming soon… better, better, better.”