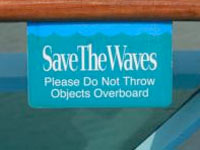 The Bahamas Maritime Authority approved a new plan by Royal Caribbean to use an alternate way of calculating its compliance with new air pollution rules.

Royal Caribbean had asked to start a fleet-wide sulfur averaging and banking plan to comply with new restrictions on sulfur emissions that took effect on August 1. Those rules limit the sulfur content of marine fuel to 1%, to curb emissions of sulfur dioxide.

Low-sulfur fuel is more expensive than heavy fuel oil, which can potentially raise the price of a cruise by $15 to $18 per day.

The U.S. Coast Guard and Canadian regulators have signed off on the plan, which has also been submitted to Malta, where other Royal Carubbean ships are flagged.

Royal Caribbean will be able to use the method for five years and can reapply after that.