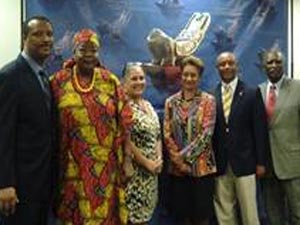 Ministry of Tourism Permanent Secretary Dr. Patricia Rogers and Bahamas Hotel Association President Stuart Bowe have announced the finalists for the Cacique Awards following a review by independent selection committees for BHA and the Ministry of an impressive slate of nominees submitted by the public and BHA members.

“There is general agreement that this year provided one of the strongest groups of nominees that we’ve had in recent years,” said Dr. Patricia Rodgers, Permanent Secretary in the Ministry of Tourism. “In fact, there were a number of nominees whose accomplishments were so varied and equally outstanding that they were considered in more than one category.  We thank the general public for their efforts.”

President Bowe echoed those sentiments adding “We are pleased to recognize individuals in the industry for outstanding contributions to the development of tourism in the Bahamas through exceptional performance.  Those chosen for recognition exemplify the service and the spirit of our hospitality business.   We congratulate all those individuals who were nominated and applaud their companies for recognizing their talent.”

The top honors will be announced and presented at the Cacique Awards and People’s Choice Music Program – an outstanding event planned for January 27th at the Wyndham’s Rainforest Theatre.

The finalists for the 15th Cacique Awards are:

Employee of the Year

Supervisor of the Year

Manager of the Year

Sales Supervisor of the Year

Chef of the Year

The BHA awards program was initiated in 1987 in celebration of the 35th anniversary of the Bahamas Hotel Association.  At that time BHA commissioned Bahamian artist Quentin Minnis to create the Duho, which has become the symbol of the Cacique Award.

In 1995, the Ministry of Tourism and BHA announced the establishment of the Cacique Awards – a merging of the Ministry’s awards with the BHA awards to create a new program designed to recognize the role played in national life by those individuals who make particularly valuable contributions to the growth and development of tourism in the Bahamas.

“We commend the Ministry of Tourism for taking this awards program to new heights and helping to make it one of the most prestigious national honors one can receive” states President Bowe.  The organizations thanked their respective selection committees, the Ministry’s Blue Ribbon Committee Chaired by Mr. Antonius Roberts and the BHA Selection Committee Chaired by Ms. Barbara Hanna-Cox.