Guyana And Suriname To Support Palestine 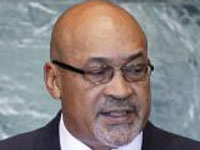 If a draft resolution submitted by Palestinian President Mahmoud Abbas seeking non-member state status goes to the United Nations General Assembly (UNGA) on Thursday, Guyana and Suriname, like all South American countries, except Colombia are expected to vote in favour.

Guyana has long been an ardent supporter of a Palestine state. Suriname more recently, under President Desi Bouterse, has joined Non-Aligned Movement (NAM) countries in recognizing a Palestinian state to the dismay of Israel.

Thursday is expected to be a showdown on the issue at the United Nations which may have dramatic repercussions for the 65-year-old Palestinian-Israeli conflict.

Abbas said he was going to the UN after having won the support of all “peace-lovers and countries that believe in the Palestinians’ right to self-determination.”

Meanwhile, Palestinian Authority Foreign Minister Riad Malki said that November 29 would be a “historic turning point in the march of our people toward a state and independence.”

The Palestinians expect about 135 countries to vote yes in the vote on Thursday.

Guyana is also among the earliest members from the hemisphere to join the UN Committee on the Exercise of the Inalienable Rights of the Palestinian People which was established in 1975, and the first Caribbean country to recognise Palestine as a state in January 13, 2011, according to Foreign Minister Carolyn Rodrigues-Birkett.

The Caribbean Community (CARICOM) does not have a unified position on the Israeli- Palestinian issue. Other CARICOM nations such as The Bahamas, Jamaica and Trinidad and Tobago are expected to abstain due to pressure from Washington and Israel, and their record of voting at the UN on the subject. The economies of many Caribbean states are heavily dependent on tourism, especially American tourists. Hence, it is expected that the latter three countries will abstain.

After much discussion on Tuesday in Europe between Abbas and the leaders of Britain and France, both of these countries have indicated that they will vote yes on Thursday. China and Russia are also expected to vote yes. This leaves the United States most likely as the only UN Security Council permanent member to vote no. The EU still does not have a unified position onthe issue and it is not expected that member countries will vote with one voice.