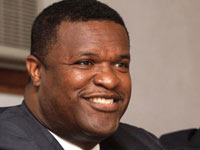 Following criticism that Prime Minister Perry Christie only met with the “gambling boys” ahead of the announcement of the referendum date, the nation’s leader said that he intends to meet with the Bahamas Christian Council (BCC) to discuss the questions that will be included on the ballot.

“I have decided, whether it’s criticism or not, there are two options that I will be putting to the Cabinet and I will then cause discussions to take place with those who I know to be the proponents,” Christie told reporters yesterday outside of Cabinet.

“I know the FNM has now launched their campaign for no, but I will meet with the Christian community as they organize, through the Christian Council to explain the question or questions and then cause a meeting to take place with those who are yes going forward.”

Last month BCC President Rev. Dr. Ranford Patterson said he was offended that the Christie administration met with the “gambling boys” but did not meet with the BCC before the announcement was made.

“I know for sure that they met with them, with those gambling boys,” Patterson said. “I have information that the government met with them several times.”

When told yesterday that the government intends to finally meet with the christian organization, Patterson said he would welcome that.

“If he makes himself available we will make ourselves available,” Patterson said, adding that he has not received a formal invitation as yet.

The BCC is fiercely against the legalization of any form of gambling for Bahamians.

Last month it launched its anti-gambling campaign ‘Save Our Bahamas’, however the campaign efforts fizzled after the government pushed the referendum date back.

Patterson told The Nassau Guardian yesterday that the church will relaunch the anti-gambling campaign in the new year.

In the meantime, he said the church leaders have been receiving support.

“It is awesome,” he said. “The Bahamian people are rising up and speaking through the talk shows. We have galvanized most of the islands so far and we are excited about the possibilities. We will continue our advertisements and the rest of it in the new year. Rawson Square is no longer available until after the holiday so we have to make some adjustments.”

As a part of the campaign, the BCC intended to hold a “Prayer in the Square” every Monday leading up to the referendum.

Asked if the council still believes that the Bahamian people will reject the referendum, Patterson said he remains optimistic.

“But again if the Bahamian people choose not to, we will be there to pick up the pieces, that’s our job,” he added.

Prime Minister Christie has said on may occasions that the government has no “horse in the race”.