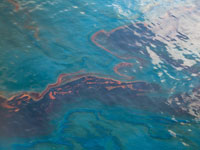 Bahamian government officials said that a cargo ship has been slowly leaking oil off the northernmost island of the Bahamas.

Transport Minister Glenys Hanna-Martin said Monday that the ship’s hull was somehow breached off Grand Bahama island and that the spill occurred following a cargo vessel’s departure from the Freeport Container Port to Florida.

However, after observing the container ship from a helicopter, Ms. Hanna-Martin is describing it as a “tier one spill,” the least threatening type.

Crews are working to contain the leakage from the vessel, which was carrying some 3,000 gallons of oil. The Bahamas has not called on the U.S. Coast Guard for assistance.

Environment Minister Kenrid Dorsett says it does not appear to be “as bad as originally feared.”

Dorsett says the Bahamas will issue an update within the next 72 hours.

It is reported that the oil tanker may have spilled thousands of gallons of oil.