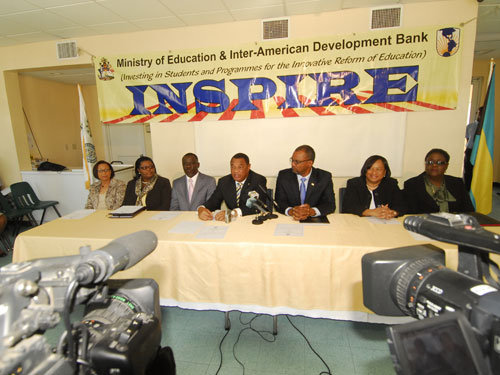 The Ministry of Education has spent $2.2 million over the past four months to improve the technological infrastructure of 76 Primary and Secondary Public Schools throughout the Commonwealth of The Bahamas.

The upgrades are part of Phase I of the Government’s plan to “transform schools into strong, technological centres” through national and international linkages utilising an Information Communications Technology (ICT) Sub-Component.

Government officials say – due to the large investment in the ICT Sub-Component – a Technology Coordination Unit (TCU) has been formed and given oversight of establishing a school instructional technology support structure that will ensure that at least 80 per cent of the ICT hardware is functional at all times.

Minister of Education, Science and Technology, the Hon. Jerome Fitzgerald, said the plan was launched as far back as 2004 by after then Minister of Education, Alfred Sears, saw the need then to negotiate a loan with the Inter-American Development Bank (IDB) in order to transform the nation’s public schools into “21st century educational centres of excellence.”

“As we reveal the continued strategic plan for the Information Technology Sub-Component of that strategy, we are speaking to the fundamental issues that were identified based on extensive diagnostic research carried out during the Project definition Phase from 2004-2008,” Mr. Fitzgerald said. “

“What we are seeing today is the culmination of that research. It may have taken us six years to get here, but there is an old saying: ‘Better late than never.’ The aim of the Ministry of Education, Science and Technology with regards to ICT is to give public schools throughout The Bahamas a significant technology boost.”

Mr. Fitzgerald said the objective will be attained through the implementation of four strategies that will include: creating an educational system that is technologically sound and competitive by placing appropriate emphasis on training and skills development in technology, and by making education more relevant by ensuring that teachers and students are equipped to perform at their best in response to the changing needs for the growth and development of The Bahamas in a global market.

Additionally, ministry officials will ensure the effective management of education by training teachers, administrators and technical officers to employ technology to effectively carry out administrative work, and by providing ICT-related career opportunities for a large number of Bahamian youth.

“Investment in this ICT Sub-Component has been enormous, therefore it is crucial that measures are put in place to oversee the implementation of the strategy,” Mr. Fitzgerald said.

“This oversight comes in the formation of a Technology Coordination Unit (TCU) which has the ambitious goal of putting in place a school instructional technology support structure to complement the increased hardware, software and training and to ensure that at least 80 per cent of ICT hardware is functional at all times,” Mr. Fitzgerald added.

The Education Minister said two Bahamian companies have won the bids to provide the ICT hardware, software and related services for Phase I of the implementation.

“The Project has gone relatively smoothly and remains within budget,” he said. “Last week I signed off on Phase II, the final stage of this project which will see a further expansion of technology in the public school system to the tune of approximately $850,000, bringing the total investment in ICT within one year to above the $3million mark,” Mr. Fitzgerald added.