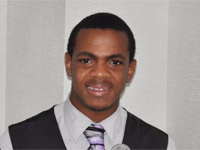 “Our Constitution is the highest source of law within the Commonwealth of the Bahamas. As such, this document should never be static; it should always be evolving to reflect the transforming culture & people of the country.” With this belief, Ernesto G. Williams, President of the College Of the Bahamas Union of Students (COBUS) offered reform recommendations on a number of issues to the Constitutional Review Commission on behalf of COBUS. He addressed the Commission on Friday, 18th January 2013.

Fixed term limits for the Prime Minister; universal tertiary education; the abolition of the Judicial Committee of the Privy Council and bringing an end all forms of discrimination inclusive of gender, age and national origin were some of the issues Mr. Williams discussed in his address to the Commission.

Joining the chorus of many Bahamians, including the government who are calling for an end to gender discrimination, Mr. Williams decried the inherent constitutional bias against women regarding their children and spouses and called for this error to be quickly corrected.

“Under Article 3 Subsection 2 and 8, only a male, in all instances, can pass on citizenship to his children and this is not so for the citizen who happens to be born a female. The College of the Bahamas Union of Students finds this to be flagrantly wrong and it stands as a slap in the face of each of our mothers and those brave women who stood strong during the Women’s Suffrage Movement all those years ago. This is an error that must be quickly corrected; so many Bahamian children have been ostracized under this, simply because of the nationalities of their fathers.”

Mr. Williams also said that “similarly under Article 5 of the Constitution, women cannot pass on their citizenship to their husbands. What exactly are we telling our women? – that they are of less value to this country as opposed to men? So many families have suffered under this blatant discrimination and many marriages have failed because of this.”

Continuing with the general theme of discrimination, the COBUS president took on the hot button topic of gambling, pointing out that “the average Bahamian might have no idea that within the Constitution of the Bahamas, the Government of the Bahamas can lawfully discriminate against Bahamians in relation to Gambling under Section 26 Subsection 4(e). How is it that in the Bahamas, a country to which Bahamians are the inheritors, that a foreigner can have more rights than locals in their own country?”

He similarly called for this discriminatory provision in the constitution to be removed.

“Under Article 74 of the Constitution, there needs to be term limits (for those) who serve as the Prime Minister, down to only 2 consecutive terms. Many developed democracies have term limits on their leaders. I am truly of the belief that the Bahamas has robbed themselves of ingenuity and creative thinking because of the absence of such requirements for well over 50 years. If this was enshrined in our Constitution since 1972, we would have had at least 2 other Prime Ministers bringing new leadership, insight and prospective to our country.”

Mr. Williams also recommended the replacement of the Governor General with a president; a reduction in the age requirement for senators from 30 to 21, bringing it in line with the Lower House; the removal of age discrimination; the establishment of an Independent Boundaries Commission and the abolition of the Judicial Committee of the Privy Council.

The Commission’s work continues and according to its chairman Sean McWeeney QC, they are on schedule to report to the government by the end of March of this year.