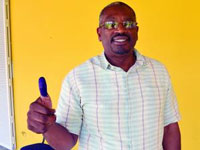 Free National Movement (FNM) Leader Dr. Hubert Minnis said he hopes the government has learned its lesson over the failed gaming referendum and would not repeat the same mistake ahead of the planned constitutional and oil referenda planned for this summer.

“I think the prime minister and the government has learned their lesson,” Minnis said during a telephone interview last night. “You cannot ask an individual to vote on a particular issue that they don’t understand. That’s the hallmark of democracy.”

Minnis stopped short of calling the referendum a win for the FNM – a party still rebounding from a loss in the general election and the North Abaco by-election last year.

“I see this as a win for the people,” Minnis said. “Perry Christie was playing with democracy. My party was built on the foundation of transparency, democracy, accountability, integrity and honesty.

“Christie will go down as the prime minister who attempted to destroy democracy when he allowed numbers boys to overtly deposit money on individual accounts so as to influence the vote, pay individuals, give individuals gifts in terms of TVs and different things, all to influence the vote,” he added. “Had this gone through today, the Bahamian nation would have been destroyed, but through the church God spoke to the Bahamian people.”

Minnis credited the church for rallying people to vote no.

“I want to especially thank the church who has played the most important role in this process in moving forward and the Bahamian people who participated,” he said.

“But I think what this has done is completely galvanized the church and showed the Bahamian people how important the role the church plays in our society; not only in morality, but ensuring that the government [does] what is best for the country. I urge all those who have deviated away from the church be they PLP or FNM to return to our basic principle of God.”

Last week, former Prime Minister Hubert Ingraham said he would not waste his time voting in the referendum.

Days later, he said he would vote no and urged all FNMs to do the same.

The Nassau Guardian contacted Ingraham for comment last night, however, he said he was not prepared to make a statement.

Web shop bosses and those behind the Vote Yes campaign have maintained that web shops employ more than 3,000 people directly and indirectly.

Minnis said faith in God and the assistance of the Bahamian people would help those who lost work as a result of the referendum.

“I think the whole Bahamian nation will get together and do whatever they can to ensure that all Bahamians have some degree of comfort within the society,” he said.

“What has come out of this is that if you believe in God and you follow the principles of God then all things can be possible.”