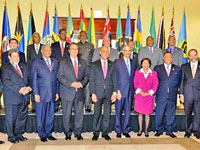 The need for the urgent restructuring of the Caribbean Community (CARICOM) and its various agencies, regional security, particularly gang violence and trafficking in firearms and drugs, as well as the current state of indebtedness, and poor economic performance of some regional economies were discussed by CARICOM heads of government, who met in Port-au-Prince, Haiti, on Monday.

At the opening of the inter-sessional meeting of CARICOM, immediate past chairman of the 15-member grouping, Dr Kenny Anthony, said the heads are meeting at a time when the many regional economies are in turmoil, and expressed the hope that the two-day meeting would examine closely the current state of economic affairs in the region.

Anthony, who is the prime minister of St Lucia, urged that reform of the regional grouping should be wider than at the level of the Secretariat, and must include the various councils such as the Council for Trade and Economic Development (COTED) and Council for Human and Social Development (COSHOD). There should be heavy emphasis on the Implementation Agency for Crime and Security (IMPACS), Anthony stressed.

Current chairman of CARCIOM and president of Haiti, Michel Martelly, was very outspoken as it relates to the free movement of skills and goods, a key pillar in the CARICOM Single Market and Economy.

“I begin by quoting the problem of movement of persons and goods. Our countries are in a paradoxical situation: so close but yet so far! Among many other factors, the lack of a dedicated transport system constitutes the heart of this problem… In regard to our production, too often, a good manufactured within the Community must pass through a country outside the Community before reaching their destination in another member state. Under these conditions, the inter-community trade will fail to reach an acceptable level of growth,” Martelly said.

Speaking of trafficking of illicit drugs and weapons within the CARICOM countries, he said, “The sovereignty of our countries is sometimes raped by powerful non-state actors engaged in illicit drug trafficking and who use our territory as transit points. Faced with this threat, we must strengthen our cooperation in order to defeat these criminal networks … Given our limited resources, it would be appropriate that we receive, in this struggle, the support of states affected by this traffic, including the equipment and implementation of development programmes for our agents.”

Martelly pleaded the cause of Haiti within CARICOM, stating, “I take advantage of this space to advocate in favour of my country, which for the informed observers, failed to take full advantage of its accession to the Community. Today, I would like to say that Haiti should be seen and treated as an opportunity. Despite its difficulties, it represents a good opportunity for the region, an opportunity for each CARICOM country.”

He said, “Our economy needs to be supported by productive investment to be viable… The Republic of Haiti intends to contribute to the achievement of Community objectives such as the improvement of production, productivity and international competitiveness. These objectives are achievable within the framework of internal market, fully integrated and liberalised.”

Martelly said the work has only just begun and the country has a vast field to be cleared in all areas of functional cooperation of the Community to be on the same level as its partners.

“My objective in the coming months is to ensure, with the grandeur and prestige required the leadership of the integration process is the option to leave as a legacy a Caribbean Community strengthened in unity and solidarity, and even more dynamic,” he concluded.

Secretary general of CARICOM, Irwin LaRoque, in his remarks, updated the heads on the ongoing reform at the secretariat and noted that already a review of the grouping’s security institutions was done.

LaRoque was very vocal on the current state of regional economies, many of which he said are stagnant, as a result of the 2008 global economic and financial crises.

“The excruciating debt burden is exacerbated by the policies of the international financial institutions which disqualify many of our member states from concessionary financing because of criteria inappropriate to our circumstances. Those criteria are also being considered by other international development partners and, if adopted, could render our development efforts even more challenging.”

Those financial and economic burdens are intensified by the growing levels of crime in our Community, in particular the rise in gun-related violence. The threat posed to the stability of our region by the prevalence of firearms cannot be underestimated, and the on-going wanton waste of human life is a continuing source of grief, he stated.

“The effort to combat this menace to our society will occupy the attention of this meeting as the major item on the agenda. A part of that discussion will be an exchange of views with Mr Eric Holder, the attorney-general of the United States, a country which has been a major partner in the area of crime and security,” LaRoque said.