Francis: Parades Should Start Paying For Themselves 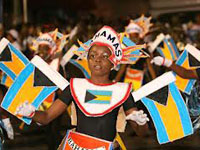 While the official results of Junior Junkanoo Parade held on Saturday are yet unknown, National Co-ordinator for Junior Junkanoo, Percy Vola Francis said, he is pleased with the development of the Junior parade in Grand Bahama.

“Over the 14 year period, I’ve seen a tremendous improvement in costume design, theme selection, the social interaction, the camaraderie of schools. It identifies that this program is a healer, a means by which if there is a turf war or disturbance or rivalry, it seems that Junkanoo is a soother.

However, Francis said, what he is concerned about is the fact that these parades generate no revenue.

He noted that at the end of the day, what’s needed is a purse in the moving forward of the program, instead of relying on numbers and all the people to come in to do what is necessary.

“Yes, we need sponsorship, sure, but these parades need to start paying for themselves. That concerns me.

“They incorporated it into the classroom and let me tell you there has been much improvement in the numbers and in the grades.”

Francis said that Junior Junkanoo can be used as a yardstick.

“And guess what, they will feel dead bad because they want to be a part of this thing and they would improve to do so.”

Francis said that this is just the basic stuff that Junkanoo can do for the students.

He went on to talk about the creative part of it which he said is a lesson all in itself.

Editor’s Note: Mr. Francis was recently photographed as part of the Bahamian Project. You can learn more about his portrait sitting and the project by clicking here.