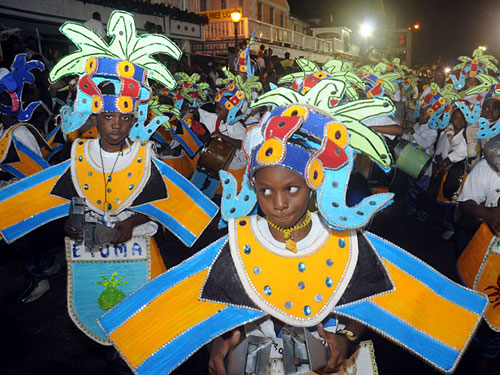 Now that the highly charged 2013 New Year’s Day Donna Lauretta Duncombe Junkanoo Parade is over and the Swingers Junkanoo group have wrapped up their victory celebrations, focus is now being placed on the Junior Junkanoo Parade set to hit the streets on February 2, 2013.

“We are expecting some 27 schools to participate and are encouraging the community to come out and show their support.

“Our young people will be out there doing what is necessary, displaying their cultural pride, making a difference in their own right and it is definitely disheartening for them when you look out at the bleachers which are able to seat 2,000 persons and there are barely 500 people present to show their support,” Stubbs said.

According to the coordinator tickets for the parade are affordability priced and purchasers can pay between $5 and $10 per ticket.

“This year’s Junkanoo parade is named in honor of Michael ‘Mikey’ Wright leader of the Harbour Boys Junaknoo group.

“I have been involved in Junkanoo for 30 years and those of you who know Mikey, know he has be involved with Junkanoo some years prior to my involvement,” Stubbs revealed.

Since the inception of the HBJG in 1980 Wright has been at the helm promoting wholesome cultural appreciation of Junkanoo and ensuring young men, women, boys and girls learn the skills necessary to participate in one of The Bahamas’ most noted cultural expressions.

“Mikey has always been working in the trenches of Junkanoo and his goal is to pass on the love of the culture more so than winning parades.

“He is continuously encouraging the promotion of the cultural aspect of Junkanoo to our young people and he works in the schools with them in an effort to see our heritage advance,” Stubbs said.

The coordinator also noted that the bleachers that were assembled for the 2013 New Year’s Day Donna Lauretta Duncombe Junkanoo Parade will remain in place for the Junior Junkanoo parade as it is a cheaper undertaking for the Grand Bahama Junkanoo Committee under the directorship of the Ministry of Youth, Sports and Culture’s Cultural Affairs Division.

Francis: Parades Should Start Paying For Themselves