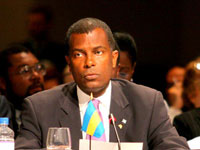 Minister of Foreign Affairs and Immigration Fred Mitchell said that a new Parliament building is long overdue as the present facility in Parliament Square downtown Nassau, is no longer adequate for members.

“This is long overdue. I do not like to work in this building. It is cramped. It is inadequate, It is too intimate and too accessible,” Mr. Mitchell said.

He moved a Resolution on a Select Committee Request to review the allowances, benefits of Members of Parliament and Senators and to construct a Parliamentary complex, during a debate in the House of Assembly on Wednesday, February 6, 2013.

“The goal is to put in place a system which will allow for the constant review in a transparent and objective context, on a regular basis so that the work of a Member of Parliament or Senator is properly supported,” Mr. Mitchell said.

Mr. Mitchell has been a parliamentarian since 1992; serving in both houses of Parliament. He recalled a 1977 debate in the House when the late Lynden Pindling was seeking to put in place the salaries for parliamentarians and ministers and other officers of the state.

Mr Pindling had said then that the salaries were being put in place to make it possible for men and women of modest means to run for office and to serve in office,” Mr. Mitchell said.

He read suggestions from ‘The Case for a New Parliamentary Complex” written by Chief Clerk of Parliament Maurice Tynes, who outlined that the Parliament has met in that particular building since 1805. The document also noted the fundamental tenet is that each of the branches of Government is independent of the others and that the power and authority of the Government is dispersed over the three branches rather than concentrated under one branch of the Government.

The document further contends that the new parliamentary complex, when completed, ought to be the centrepiece for a revitalised town centre, built in Nassau on a hill or ridge. The suggested locations being the general area behind the Ministry of Foreign Affairs on East Hill Street or the old Victoria Hotel.
Regarding the fundamental changes in the way the House and the Senate are managed, Mr. Mitchell said there is a need to delink the Parliament, its funding and work from the Executive.

“The business, administration and funding of the House is presently done through the Cabinet Office. The Cabinet Office can properly be the link between the two bodies – the Executive and the Legislative – but the House and the Senate should run their own affairs,” Mr. Mitchell said.

He also suggested that the House and Senate be responsible for the administration of all matters, which affect the emoluments, allowances, and benefits of the House.