On Monday, over 1,000 students at R. M. Bailey Senior High School gathered in a special assembly to celebrate the Commonwealth’s global youth and its 2013 Theme “Opportunity Through Enterprise”. The event also marked the 40th anniversary of The Bahamas as an independent nation.

Each year the Commonwealth’s 54 countries and 2 billion people celebrate Commonwealth Day under a special year-long theme. This year the theme is “Opportunity Through Enterprise”, aimed to raise awareness of different types of enterprise, including social and environmental. The 2013 Commonwealth theme focuses discussions on enterprise education, and the building of transferable skills in young people, preparing them for the world of work.

Ms. Eulease Beneby, Superintendent of Education Southeastern District, encouraged R.M. Bailey’s students to remain united with the global Commonwealth family and its commonly shared high values, and to foster their entrepreneurial spirit. She urged them to place importance on their education to prepare themselves for the work place.

Young entrepreneur Atario Mitchell told the students that they too can be successful entrepreneurs and to value the opportunity given by education.

“While you are the generation facing more enormous and complex challenges, you are also a generation that, if you embrace the opportunities before you, you will discover that you have the greatest opportunities to be the architects, builders, leaders and agents of change for a newer, better and more modern Bahamas,” said Mitchell.

He shared his story how, starting from practically nothing, with just a good business idea and a will to work hard, he built the leading Bahamian striping company and created a whole new local industry in just three years. Mitchell told how he turned a $5,000 government seed grant in a company that will reach over a $1 million in sales by the year’s end.

Mitchell exhorted that: “We all must take a new attitude towards the importance of a good education.  We must build a new sense of community that must stand upon the axis of shared values and the common and collective goals of ourselves as a people.  We must begin teaching you, our young people, how to embrace every opportunity if we are going to build a bigger, brighter and better Commonwealth of the Bahamas.”

Video Caption: Bahamas Striping President Atario Mitchell was invited to address more than 1,000 students at R. M. Bailey Senior High School for the school’s Commonwealth Day celebration and special assembly. Mitchell gave an inspiring speech to help the students believe than through hard work, any of them can make themselves successful.

Mitchell encouraged the students to believe in themselves, to find a way around obstacles, and to never give up pursuing their dreams.

“You don’t have to wait until you finish school to embrace opportunities and start an enterprise.  As young people, instead of forming, joining or being involved in gangs or engaging other anti-social behavior, form an enterprise.  If you are smart enough to run the streets, you are smart enough to run a business.  Get a sponsor to believe in your dreams and invest in you with a lawnmower.  On weekends, instead of sitting on the blocks, start a lawn care company. Use your energy, intelligence and spare time to build a business that will reward you rather than place you behind bars,” said Mitchell.

“It is imperative that you recognize that your ability to attend school is a gift that millions around the Commonwealth today cannot afford. You must understand that your embrace of a good education will give you the most critical asset that you can acquire,” said the 26 year-old entrepreneur.

School Principal Johnson said it was an honour to have Mitchell address the students.

“He’s a fine role model of what we hope many of our students will become. R. M. Bailey has a spirit and history of achievement. Mitchell’s success in a skilled trade reminds how it’s important to give Bahamian students opportunities to excel in the trades as well as in academics,” said Johnson. “Not everyone is cut out to succeed academically but they could be very successful in a trade, just like Mr. Mitchell.”

“That’s why, here at R. M. Bailey we now have classes in carpentry, welding and auto-mechanics to supplement academics. But we’ve also raised some children’s GPAs dramatically. Another example that brings us pride is our students who have won top prizes in the Sir Clifford Darling Essay Contest. We’re growing in other ways too, such as upgrading our library to become a valuable reference resource, and we’re upgrading our sports facilities to offer more sports,” said Johnson.

On Commonwealth Day, schools around the world used using a mix of world music, dance and personal testimonies to celebrate the Commonwealth’s diversity, unity and shared commitment towards youth, social and sustainable enterprises.

Throughout the year, the Royal Commonwealth Society organises summits, leadership programs and competitions for the world’s youth through its web site http://www.thercs.org. 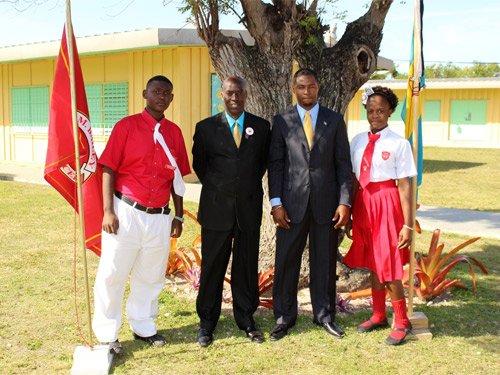