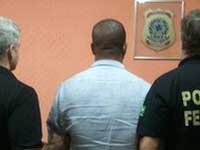 Former Turks and Caicos Island (TCI) premier Michael Misick was re-arrested by Brazilian Federal Police in Sao Paulo, on the authority of the Brazilian Supreme Court, according to Governor’s spokesman Neil Smith.

Smith said that, on Monday, April 15, 2013, the Brazilian Justice Minister issued a decision to refuse Misick’s appeal against a refusal to grant him political asylum. The decision was published on Tuesday in the Brazilian Official Gazette.

Following his original arrest in Rio de Janeiro on December 7, 2012, by Brazilian Federal Police, Misick was later released on bail on February 8 of this year, ostensibly because the British government had not delivered all the paperwork necessary for Misick’s extradition within the specified 60 days after his arrest.

His re-arrest, however, appears to have been precipitated by the final denial of his application for political asylum.

Misick faces a number of serious charges relating to corruption and maladministration in the TCI during his time in office.

“It is in the best interests of the TCI that allegations of wrongdoing are thoroughly investigated and that Michael Misick returns there as soon as possible to answer these charges. As Michael Misick was born in a British Overseas Territory, he is, therefore, receiving British Consular Assistance; he was last visited by British consular officials on Monday 15 April in Sao Paulo,” Smith said.