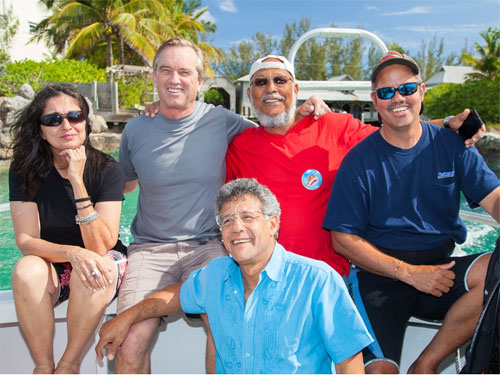 Waterkeeper Alliance, known as the voice of the world’s waters with organisations and volunteers in 37 countries, announced its first partnership with The Bahamas today — minutes after divers emerged from inspecting reefs off the southwest coast with news that the partnership was needed even more than anticipated.

Waterkeeper Alliance President Robert F. Kennedy, Jr. announced the partnership less than half an hour after he and other environmentalists dove reefs off western New Providence near BEC that he said once held “the most beautiful elk horn coral in the world — the site of movies like Flipper and the James Bond movies, breathtaking reefs full of life.”

In the 13 years since he last dove the area, he said, some 70-80% of the coral was threatened, in part by algae and contamination from oil seepage and spills from the bay area where both BEC and the fuel companies that serve New Providence store and move oil.

But, he said, the ability to rescue, restore and preserve is always present.

“Today we are proud to announce our first partnership project with The Bahamas, these bays right behind us,” said Kennedy, a man whose passion about the environment has earned him the respect of publications like Time magazine which called him “one of the heroes of the planet.”

“The vision of Waterkeeper Alliance is to ensure that water, all our water everywhere, is drinkable, swimmable, fishable. You have an incredible opportunity here in The Bahamas to protect what belongs to the Bahamian people and is enjoyed by your visitors and we hope that this partnership will be the first in an ongoing relationship.”

Diver, senior attorney and a director of the Coalition to Protect Clifton Bay and Save the Bays, Fred Smith, QC, seized the opportunity to urge Waterkeeper Alliance to approve other projects — Freeport Harbour, Bimini Bay, Dean’s Blue Hole, among them. “We will begin our efforts on New Providence where the highest population of The Bahamas resides. We will save Clifton Bay because of the quality of the reefs and the extent of the visitor and local interest, then move to Bimini Bay, Baker’s Bay, Dean’s Blue Hole, Freeport Harbour. It’s our goal to save all the bays. We have started locally. We are going national and with the Waterkeeper Alliance we will be international. We also have to call on government to do what government promises it will do to protect the environment. It does not matter which government. What matters is that we save this, our Bahamian environment.”

Waterkeeper’s success began as a movement to clean up New York’s Hudson River, a body of water so polluted by all the industrial and manufacturing plants along its shores that randomly dumped, Kennedy said, that it would change colours depending on what colour cars an auto plant was painting that week or would catch on fire, automatically combusting from run-off that so contaminated it that the river was poisonous, dark brown, smelly and a health hazard. River shoreline property values, once high, declined, turning what had been desirable real estate into no man’s land. It took a grassroots movement and some 400 lawsuits to clean it up, change the laws, hold companies responsible and today, said Kennedy, the river is so clean, clear and pristine you can drink from it.

That success led to many other projects in rivers, streams and bays from the Chesapeake to India, across the U.S. and across the globe as far as Australia and Africa. Each operates with local volunteers and international support.

“You have a $50 million a year dive industry that exists because of the beauty of these reefs,” Kennedy said. “People all over the world hear of the reefs of The Bahamas. Today, some of what we saw was heartbreaking. We were diving through oil deposits. Yet I believe that when people come together and decide they are going to do something for the public good like saving and restoring these reefs, it can happen. It will happen. And Watermaker Alliance is proud to work with these dedicated people to make sure we do everything we can to make it happen. But this is a local effort and it will take local participation and dedication.”

About Robert F. Kennedy, Jr.
Robert F. Kennedy, Jr.’s reputation as a resolute defender of the environment stems from a litany of successful legal actions.   Mr. Kennedy was named one of Time magazine’s “Heroes for the Planet” for his success helping Riverkeeper lead the fight to restore the Hudson River. The group’s achievement helped spawn over 207 Waterkeeper organizations across the globe.

Mr. Kennedy serves as Senior Attorney for the Natural Resources Defense Council, Chief Prosecuting Attorney for the Hudson Riverkeeper and President of Waterkeeper Alliance.   He is also a Clinical Professor and Supervising Attorney at Pace University School of Law’s Environmental Litigation Clinic and is co-host of Ring of Fire on Air America Radio.   Earlier in his career he served as Assistant District Attorney in New York City.

He has worked on environmental issues across the Americas and has assisted several indigenous tribes in Latin America and Canada in successfully negotiating treaties protecting traditional homelands.   He is credited with leading the fight to protect New York City’s water supply.   The New York City watershed agreement, which he negotiated on behalf of environmentalists and New York City watershed consumers, is regarded as an international model in stakeholder consensus negotiations and sustainable development.

He is a licensed master falconer, and as often as possible he pursues a life-long enthusiasm for white-water paddling.   He has organized and led several expeditions in Canada and Latin America, including first descents on three little known rivers in Peru, Colombia, and Venezuela.

About Waterkeeper Alliance
Founded in 1999 by environmental attorney and activist Robert F. Kennedy, Jr., and several veteran Waterkeeper Organizations, Waterkeeper Alliance is a global movement of on-the-water advocates who patrol and protect over 100,000 miles of rivers, streams and coastlines in North and South America, Europe, Australia, Asia and Africa.