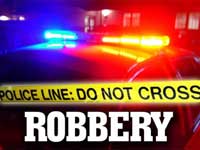 The robbery happened a few blocks from where an American diplomat was robbed the day before on her way to service at St. Francis Xavier Cathedral. According to police, two suspects approached the two men and stole a bag, which contained cash and other items.

Police said the suspects were at large yesterday and appealed to the public for any information that may lead to their arrest.

Police also encouraged residents and visitors to be aware of their surroundings. Reports of Americans being targeted by robbers have been surfacing in the headlines more frequently.

The Free National Movement (FNM) said in a statement yesterday there have been reports of additional attacks against visitors near St. Francis where the American diplomat was robbed.

“The FNM urges the government of The Bahamas to ensure that visitors and residents are protected against violence,” the FNM said.

“Clearly, it must be possible for a visitor in broad daylight to attend the cathedral at West Street without being robbed.”

Four men have been charged with his murder.

Bruner’s murder prompted yet another warning from embassy officials for Americans to be on the lookout.

Last Sunday, two American visitors were robbed at gunpoint outside the Royal Towers, Atlantis Resort and Casino, though no one was harmed in that incident, police said.