Cash For Gold May Fuel Money-Laundering 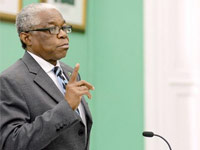 Minister of National Security Dr. Bernard Nottage said the government is attempting to shut down cash for gold businesses as new information suggests that some of the operations could be used to launder money.

However, he said efforts have been somewhat hampered as the enterprises are licensed businesses.

“We have to tread carefully as to what we do to get these businesses closed and the reason why they haven’t been closed yet is because we are working in the context of the law,” Nottage told The Nassau Guardian during a recent interview.

“What has surfaced since we have researched this matter is that there is a potential for these businesses to be used for money laundering, and this is a matter of serious concern to some of the foreign governments with which we have relationships.”

Nottage said several owners of the cash for gold operations have spoken to him. He said many of them suggested that their businesses are legitimate and should not be closed down.

“They tell me that they cooperate with the police,” he said. “All I know is the risk to people’s personal safety has been seriously compromised by these cash for gold business.”

Nottage added, “We don’t want to put people out of business who are running legitimate businesses, but my primary responsibility is of the safety of the Bahamian people, and it’s totally unacceptable to me for people to be afraid to wear their jewelry or for people to be unsafe in their homes because criminals think that they have lots of gold in their homes.”

He said he has personally witnessed assaults.

“It must come to an end,” Nottage said.

He said the government also wants to place a ban on copper exports.

He noted that copper theft has resulted in tremendous losses for businesses in both the public and private sectors.

During his contribution to the budget debate in the House of Assembly last month, Nottage called for the closure of all cash for gold businesses and a temporary ban of copper exports.

At the time, he revealed crime statistics, which suggest that there is a relationship between stolen goods and cash for gold businesses.

The statistics also suggest a relationship between stolen goods and copper exports.

Similarly, of the 157 robberies during that period, 64 cases or 41 percent involved jewelry or copper theft.

Nottage said he is also concerned about the importation of wrecked vehicles. He said the police have information that weapons are being smuggled in some of the vehicles.

“And as you know one of our biggest problems is the proliferation of weapons,” he said.